A Few Rounds with 'Happy Hour'

The first one with drinks was in the mid-1900s.

Happy hour refers to the period of time in the early evening—typically starting around 4 p.m.—during which drinks and appetizers are available at reduced prices at bars or restaurants. That fact alone makes people happy, but the happy in happy hour is usually more about being done with work for the day and unwinding with friends over a few alcoholic beverages (and maybe snacking on some greasy finger foods)—all at half price. 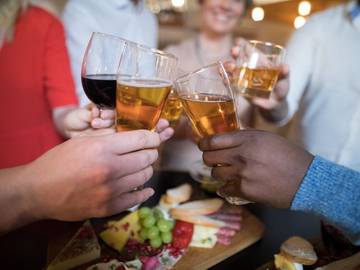 Everyone loves a half-price app.

Most establishments are aware that one hour is not sufficient so extend the happy hour beyond 60 minutes. Lexicographers are OK with this loose sense of hour—not to mention, we can appreciate the extra time given to kick back after a day of "harmless drudgery." Use of the word for an indefinite or fixed period of time beyond 60 minutes goes back to the late Middle Ages (you might be familiar with the rather archaic expression "in their hour of need," for example). American writer Edith Wharton also gives us an idea of how this sense is used in her 1905 novel The House of Mirth:

Gradually, to be sure, the stress of the old thoughts would return; but at least they did not importune her waking hour.

English borrowed the word itself from Anglo-French in the 13th century, but it is ultimately derived from Latin hora, referring to a 24th part of a day or a canonical hour.

Happy, on the other hand, dates back to the late 14th century, and originally meant "fortunate" or "favorable."

Imagining how to purchase / Grace of the queene, there to bide, / Till good fortune some happy guide / Me send might….
— Geoffrey Chaucer, Chaucer's Dream, 1597

It comes from Middle English hap, which itself is from Old Norse happ, meaning "good luck." By the late 15th century, the familiar senses of the word relating to pleasure and contentment were established.

Over the centuries, there has been countless hours described as "happy," as in "a happy hour of rest and relaxation" or "the happy hours spent in the company of a loved one." In the 19th century, the term happy hour gained unique use as a designation for organized entertainment.

Perhaps the most delightful—and certainly the most novel—feature of the Evening Press's newsboy work is the "Happy Hour" meetings, held each Sunday afternoon in the gymnasium. Frequently as many as six hundred children are stowed away on the elevated seats, and their enjoyment is indescribable. The full band plays at every "Happy Hour"; … songs are sung, recitations given, stories told…
— The American Newsman, June 1895

There is no reason to discount this use of happy hour as a source for its current meaning, but there is another early use of the term that may have been more influential. Around the start of World War I, the U.S. Navy allowed its sailors a "happy hour" during which they could engage in various diversions, such as watching wrestling and boxing matches between crewmen or viewing "moving pictures."

Joy is an important feature of Jack's maritime life. His "Happy Hour" is not precisely like Longfellow's "Evening Hour." It consists of boxing bouts, the "Dago Trio," and moving pictures.
— Henry Reuterdahl, Collier's, 27 Dec. 1913

The happy hour was also granted to landlocked sailors, as evidenced in Frank Hunter Potter's description in his 1919 book The Naval Reserve:

Of course there are the usual baseball and football, and there are entertainments, and very good ones, at the Y.M.C.A. hut, but the glory of the week is the “Happy Hour,” which the men have in the gymnasium on Saturday night. Here they entertain themselves, and what with singing and recitations, sparring and wrestling, they have as good a time as anybody can give them.

Reports of drinking during these happy hours are not to be found, and it seems unlikely that alcohol would have been a part of them, particularly when at sea, because in the summer of 1914 the Navy issued General Order 99, which prohibits the use or introduction of alcohol on any ship or around any station.

The use or introduction for drinking purposes of alcoholic liquors on board any naval vessel, or within any navy yard or station, is strictly prohibited, and commanding officers will be held directly responsible for the enforcement of this order.

It seems possible that the sailors returning home popularized the term, perhaps when recounting some of the more memorable events that occurred during those periods of diversion while having a few beverages at the local watering hole (post-Prohibition, of course). How it came to include afterwork food and drink specials during the mid-20th century isn't clear. (Good business sense, perhaps?) There are other theories clouding the origin that include speakeasies during Prohibition; however, actual evidence connecting the word with such establishments is lacking.

What is clear is that military personnel and civilians alike are often mentioned in early writings containing this new sense of happy hour.

Two women go in to Tia Maria in Concord during "happy hour" for the bargain price on a double Marguerita [sic].
— Bill Fiest, The Oakland Tribune, 15 Oct. 1975

On Friday Afternoons, from four-thirty to seven, they crowd into the officers' club bar for the weekly "happy hour."
— Hunter S. Thompson, Shark Hunt, 1979

As lexicographers, the uncertainty of exactly how and when the term came to designate the time when bars and restaurants offer food and drink at a discount is a bit frustrating. But we still certainly appreciate its use in the language and what it signifies. Cheers.