What's the Difference Between Britain, Great Britain, and the UK?

The dictionary to which this article is attached is published in the United States, in the city of Springfield, Massachusetts, which sits comfortably at approximately 42.1˚ north latitude. A person heading directly east, given the time, means, and inclination, would cross most of Massachusetts as well as the vast Atlantic Ocean before reaching the city of Porto, Portugal. To find the homeland of the English language, such a traveler would have to head north from there and a bit further east for another 800 or so miles, at which point they'd arrive at a group of islands that is home to many speakers of English (among other languages) as well as the birthplace of the language itself.

We are embarrassed to report that if the traveler were a native to the United States, it is not unlikely that they would experience some confusion about just what to call the lovely lands at the end of such a long journey. We aim here to prevent just such an occurrence. 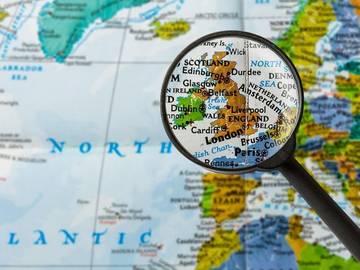 Fix yourself a ploughman's lunch and let's sort this out.

We'll start with the term with the broadest referent, that group of islands at the end of our traveler's journey. Known as the "British Isles", the island group comprises Great Britain (see below), Ireland (also see below), and smaller islands adjacent to those, including the Hebrides, the Shetland Islands, the Orkney Islands, the Isles of Scilly, the Isle of Man, and (sometimes) the Channel Islands. It's a geographical designation, not a political one, and the term British Isles has become increasingly controversial for those who feel that it implies a political connection where none exists. (More on that below.)

If our traveler were to head first to the westernmost part of the British Isles, Ireland would be the first stop. The term Ireland has both a solely geographical use in referring to the second largest of the islands of the British Isles, and two political uses: used solo, Ireland refers to what is also called (by some) the "Republic of Ireland," a politically independent country that occupies the major portion of the island; used in the term Northern Ireland, it refers to a country in the northeast part of the island that is a division of what is formally known as the United Kingdom of Great Britain and Northern Ireland. (More on that, as we say, below.)

Traveling now to the largest of the islands in the British Isles, just east of the island of Ireland, we encounter another geographical designation: the island known as both "Britain" and as "Great Britain." (Both have other applications as well, which, uh, see below.) That big island has on it three countries: Scotland in the north; England in the south; and Wales in the southwest. All three countries are, like Northern Ireland, divisions of the aforementioned United Kingdom of Great Britain and Northern Ireland. (See below and etc.)

Welcome to one of the major belows! The term The United Kingdom of Great Britain and Northern Ireland is a political designation and a bit of a mouthful. To make things easier on everybody, United Kingdom is also used with the identical meaning. To make things even easier, UK is used as an abbreviation of the whole thing. And what exactly is that whole thing? To review, it is a country made up of the island known both as Britain and Great Britain as well as the portion of the island of Ireland that is the country of Northern Ireland. Most of the various small islands included in the term British Isles are part of Scotland (that is, the Hebrides, the Shetland Islands, and the Orkney Islands) or England (the Isles of Scilly); the Isle of Man and the Channel Islands aren't technically part of the UK, but they're self-governing possessions of it. (Just what exactly that means is, we're afraid, outside the scope of this explainer, which, frankly, has to draw a line somewhere.)

To further confound matters and all of us, both Britain and Great Britain are used to refer to something also known as the "Commonwealth of Nations" or the "Commonwealth," and formerly as the "British Commonwealth" or the "British Commonwealth of Nations." That entity is an association of sovereign states consisting of the UK and a number of its former dependencies who've chosen to maintain ties with the UK and to acknowledge the British monarch as the symbolic head of their association. (We're unashamed to declare here that further details on this association are likewise outside the scope of this explainer.)

In closing, we wish to say that now that it's all down on the page, we no longer feel embarrassment at the idea that one native to the United States would experience confusion about how to refer to the lands that birthed our beloved shared language. We do nonetheless assert that one ought to try to get it right, as we ourselves did here.