Citizenship refers to a person's allegiance to a government in exchange for its protection at home and abroad. Full political rights, including the right to vote and to hold public office, and civil liberties are typically granted to a native-born citizen (under jus soli, a Latin legal term meaning, literally, "right of the soil") or to a naturalized citizen—i.e., a person who has successfully met official requirements that make him or her a citizen of a country other than their country of birth. (The term naturalization is of 16th-century Scottish origin.) Besides pledging allegiance to the country, the citizen is expected to pay taxes and fulfill other duties, when called upon, as those concerning military or jury service. 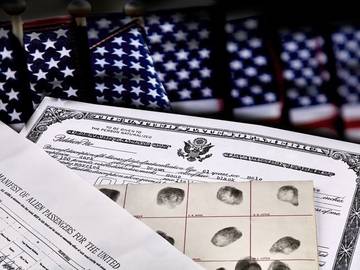 Today, 'citizen' tends to specify a person who legally belongs to a country, and 'resident' is used, generally, for a person who is legally living or working in a particular locality.

The practice of conferring citizenship to residents first arose in towns and city-states of ancient Greece, where it was granted only to property owners. The Romans adopted the practice as a bestowal of privilege that could be conferred on, or withheld from, conquered peoples; in time, citizenship was granted to all of the empire's free inhabitants. The spread of the ideals of citizenship suffered a setback in Europe during the feudal era, but they were revived during the Renaissance, and then crystallized during the American and French Revolutions.

The term citizen (based on Anglo-French cité, "city") entered English in the 14th century, and originally it simply designated a resident of a city or town. Early on, however, citizen acquired specific political significance as the name for a person who legally belongs to a state, nation, or other polity and has the rights and protections of that polity. About the 15th century, resident entered the language as a word for any person living in (it is derived from Latin residēre, meaning "to remain, abide") a particular place, such as a city—which means citizen and resident were synonymous: a person could call themselves a citizen of London, for example, or a resident of the city.

Through the centuries, however, the terms developed distinct uses. Today, citizen tends to specify a person who legally belongs to a country, and resident is used, generally, for a person who is legally living or working in a particular locality—like a town, city, or state, or even on a university or hospital campus or in a musical venue. Examples of such uses are "a creative writing resident," "medical residents," or "a resident performer." And, obviously, resident is applicable to a person who is living in a "residence." A residence is any place where one actually lives—a home, apartment, etc.—as distinguished from a domicile. In the eyes of the law, a domicile is a "legal residence," the address from which one registers to vote, licenses a car, and pays income tax. Wealthy people may have several residences in which they live at different times of the year, but only one of their homes can be their official domicile for all legal purposes.

In the court of law, the term resident is often contrasted with citizen: it names a person who has a residence in a particular place but does not necessarily have the status of a citizen. Take, for example, an everyday occurrence in immigration law: a person who has citizenship outside of the United States and who desires to work or live in the country applies for a green card, an identification card that attests to his or her legal residence in the country as an alien—that is, a person who was born in a different country and is not a citizen of the country in which he or she now resides. (And, yes, the name of the card, which dates to the mid-1900s, is from the fact that it was formerly colored green.) After thorough review of the application, the applicant, if eligible, is issued a green card and is considered a "lawful permanent resident" with the right to live and work in the U.S. and the right to the protection of the country's law. However, he or she is not allowed to vote in or stand for federal elections (rights which are granted to citizens); additionally, they can be subject to deportation if they commit certain crimes or security violations. After a certain period of permanent residency, an alien may apply for naturalization.

According to the 14th Amendment of the U.S. Constitution, "all persons born or naturalized in the United States, and subject to the jurisdiction thereof, are citizens of the United States and of the State wherein they reside." (A person born outside of the U.S. to parents who were born or naturalized in the U.S. is also a citizen of the U.S.) The Amendment makes clear that the term citizen is most accurately applied to a person who has pledged allegiance to a country (in this case, the U.S.) and has the rights and protection of that country. It also uses citizen in the sense of "a resident of a state," with which we can't argue. However, resident (and not citizen) is the best choice when referring to a person who is paying the bills to keep a roof over his or her head in a town or city.