Vane almost exclusively refers to a piece of metal that spins on an axis, like a weather vane. The homophone vain is typically an adjective meaning "prideful" or "conceited," but is also heard in the phrase in vain, meaning "tried without success" or "pointless." Lastly, vein often refers to tubes that carry blood, and in the same vein is a phrase used figuratively when multiple things follow the same line of thought or action. 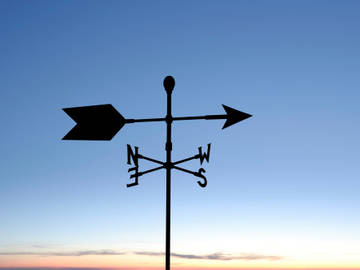 Many sounds in the English language are represented in writing in multiple ways. Take, for example, the long \a\ in vane, vain, and vein written in the sound pictures "a-e," "ai," and "ei." These homophones are spelled differently, which helps distinguish them in meaning (at least for those familiar with their meanings). Another homophonic trio of different long \a\ representation are mane, main, and mein (as in chow mein or lo mein).

Because vane, vain, and vein are pronounced the same, choosing the correct word might cause hesitation for some writers and result in a wrong choice.

[Nualphan] Lamsam believes her efforts over her eights years at the helm were not in vein. "I want to establish pride and make everyone know about our Thai women's football team," she said. "Although football is the popular sport worldwide, it only referred to men's games in Thailand."
— CNN, 11 June 2020

In coverage Tyree caught the ball and cradled it against his helmet keeping the ball from touching the ground as he fell backwards. A review of the play showed Tyree holding the ball tightly and keeping it off the ground even as the Patriot defender tried in vane to rip it away.
— Phinphanatic.com, 3 Feb. 2019

This orthographic dilemma inevitably occurs with the idiomatic prepositional phrase in the same vein and its variant form, along the same vein, which doesn't exactly line up with the original but is generally accepted. The phrases imply sameness or similarity.

The anonymous Trump administration official who authored a 2018 New York Times op-ed critical of the president, has now released a book in the same vain.
— Cleveland.com, 19 Nov. 2019

Here are examples of correct usage.

Whether you like it or not, Warner Bros. is still developing a new Gremlins movie. Once rumored to be a remake of the original 1984 horror comedy, recent details have pegged the film as more of a reboot/sequel in the same vein as Jurassic World.
— Ethan Anderson, Slashfilm.com, 6 Feb. 2016

Typically, come springtime, hundreds of WNYers prepare to participate in neighborhood cleanup efforts, including beach sweeps. As this is not possible in 2020, due to COVID-19, organizations such as Buffalo Niagara Waterkeeper are asking individuals to take part in Solo Sweeps. The idea is along the same vein, but instead of gather together to clean up beaches, and other parts of the city and suburbs, people are asked to pick up litter when they are out walking about.…
— Newell Nussbaumer, Buffalo Rising, 21 Apr 2020

In addition to wearing repellent, it can be helpful to wear a hat, which will prevent black flies from crawling into your hair and biting your scalp. Glasses or sunglasses are also a good choice, as they will shield your eyes, which black flies tend to be drawn to. Along the same vein, clothing can help protect you from black flies.
— Aislinn Sarnacki, The Bangor Daily News, 12 May 2020

The preposition substitution does raise some eyebrows to those familiar with in the same vein. However, before we talk about the idioms more, a word on the homophones and their individual meanings.

Rote memorization of spelling and of the particular word's part of speech, meaning, and etymology is recommended to distinguish vane, vain, and vein in standard use (and in idiom). Vane is a noun that goes back to Old English fana and fane, meaning "banner," and broadly refers to a thin, flat or curved object that rotates about an axis, such as a weather vane on the roof of a barn or a vane of a windmill driven by wind.

'Vain' and 'In Vain' Meaning and Usage

Vain is an adjective denoting being too proud or being conceited ("he is vain about his appearance") or being unsuccessful or useless ("a vain attempt at catching up with the bus"). As a noun, it is fossilized in the adverbial phrase "in vain," which means "without success or without producing a good or desired result" ("they searched in vain for the missing earring"). It also appears in the idiom "to take someone's name in vain," meaning "to use (a name, especially the name of God) in a way that does not show proper respect."

"If you want to cross a river over some troubled waters, you build bridge, you don't blow one up," said Klobuchar, arguing that Sanders's Medicare-for-all plans amounted to destruction of Obamacare. ... "She took my name in vain," replied Sanders, somewhat lightheartedly, before defending his plan.
— Sean Sullivan, The Washington Post, 19 Dec. 2019

In vain also suggests, often in negative constructions, that something is pointless or useless ("heroes who did not die in vain"). This vain is from Latin vānus, meaning "lacking content," "empty," or "marked by foolish or empty pride." Its Middle English forebearer is veyn, a borrowing of Anglo-French vain and vein of similar meaning.

The third homophone, vein, is spelled veyne in Middle English. It is in the bloodline of Latin vēna, meaning "blood vessel" or "channel," senses that the English word still carries along with extended meanings. In particular, vein designates the anatomical tube that carries blood from the body back to the heart, the lines on the surface of a leaf or an insect's wing, or a streak in some material (as "the greenish veins running through the marble" or "veins of coal in the mine"). Figuratively, it denotes a strain of distinctive style or particular quality as well as a line of thought or action ("his stories are in the Gothic vein"; "ideas in the same vein").

Spelling, meaning, origin, usage … check, check, check, and check. Hopefully, that explanation on the homophones was not in vain. Now for the idioms. In the same vein is the firmly established phrase, but it has become conflated with the expression along the same line to form along the same vein. The mixing of the prepositional phrases may stem from the meanings and usage of their base words.

Line is used in a couple of collocations beginning with along that refer to the similarity of things.

To apply, you need identification, something along the lines of a driver's license.

She said she was too busy to help, or something along those lines.

Additionally, being in line suggests following someone or something else and being in line with or being brought into line implies agreement. And along the line connotes proximity in being part of a process or series of events, as in "He picked up an interest in jazz somewhere along the line." These extended uses of line and the fact that vein refers to internal lines and has earlier figurative use referring to sameness and closeness seem to have influenced the formation of the variant along the same vein.