The Difference Between 'Bug,' 'Insect,' and 'Beetle'

The word bug is used loosely for any itsy-bitsy, annoying, sometimes frightening, creeping or flying creature (and for any mild illness or cause of a minor computer problem, among other things). But the word's current usage does not reflect its history, which goes back to Middle English, where bugge referred to either a scarecrow or a hobgoblin.

The above example is John Wycliffe's rendering (in 1382) of the sixty-ninth verse of the sixth chapter of the (Apocryphal) Book of Baruch. When the Douay Version of the Old Testament was published in 1609, the "bugge ... in a place where gourdis wexen" had become "a scarecrow in a garden of cucumbers." A bug was by then no longer a scarecrow. That it was still a hobgoblin, William Shakespeare's Hamlet's "ho! such bugs and goblins in my life" indicates. 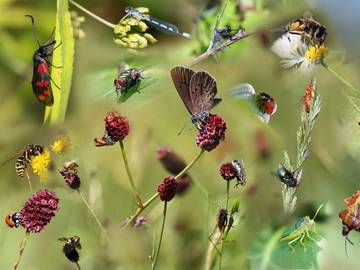 In the late 16th century, the word bug came to generally refer to insects of any pesty kind. In the late 18th century, the entomological order Hemiptera was created and gave definition to the creature. Bugs of the order (or its suborder Heteroptera) have mouthparts (or stylets) that are adapted for piercing and sucking plant and animal juices, and they have forewings that are thickened at the base. All true bugs go through what is called incomplete metamorphosis—technically, they are hemimetabolous and hatch as nymphs from their eggs. A nymph is a juvenile version of the adult bug that matures after several instars, which are periods in between molting, into an imago. The true bug does not undergo the pupa or chrysalis stages as beetles do. When the word bug is part of the common name for a member of the order, it is often a separate word (e.g., assassin bug, chinch bug, kissing bug, or shield bug).

Ladybug chiefly occurs as a closed compound and, actually, the creature so named is not a true bug but a beetle of the order Coleoptera. By definition, a beetle is an insect that has four wings of which the outer pair are modified into stiff elytra that protect the inner flight pair, which are folded underneath when at rest.

Beetles are holometabolous, which means they undergo four developmental stages in their life—egg, larva, pupa, and adult insect—that constitutes as complete metamorphosis. The larva hatches from the egg and passes through several molts before being transformed into a pupa or chrysalis from which the adult emerges. Another defining feature of a beetle is that it chews and gnaws (e.g., the furniture beetle feeds on lumber and dead wood). Beetles without the surname beetle are the chafer, firefly, and weevil.

Both bugs and beetles are defined as "insects," so what exactly does that genus term mean? Insect refers to any arthropod of the class Insecta. Members of the class typically have three well-defined segments (in Latin insectus is the past participle of insecare, meaning "to cut into," which alludes to the segmentation): head, thorax that bears three pairs of jointed legs and typically one or two pairs of wings, and a segmented abdomen. They also have a retractable proboscis or mouthparts capable of chewing, a pair of antennae, and usually a pair of compound eyes. Bees, ants, butterflies, and grasshoppers exemplify the class Insecta; however, beetles, bugs, and flies are also members.

Although similar in a creepy way and sometimes referred to as an insect, creatures such as the spider and tick are not technically insects—they have more than six legs, have two main body parts, and no wings. They are, however, of the same phylum, Arthropoda, which also consists of related invertebrate species such as the centipede, the scorpion, the shrimp, and the lobster—all of which have segmented bodies and jointed limbs.

Generally speaking, a bug, insect, and beetle are all arthropods. Specifying what is a true bug, insect, or beetle can sometimes be difficult—hence, the occasional synonymous interchange of their names. If you get a good look at the creature's wings or its segments or watch how it eats, you might just be able to identify which it is—if you don't get creeped out first.