To many denizens of regions that experience frigid weather, the expression snug as a bug in a rug will likely conjure thoughts of being warmly wrapped up in blankets or tucked into bed and protected from the cold temperatures outdoors. 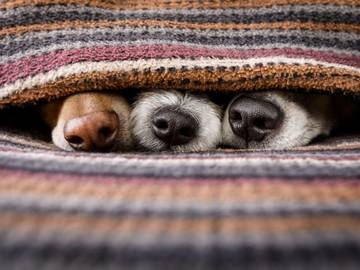 In fact, go grab a quilt or something before you keep reading. We'll wait.

The phrase first appears in print in the late 18th century. This quotation from a 1769 play staged by David Garrick, a celebrated Shakespearean British actor, in honor of the Bard is often cited as the earliest use (aside: it was probably already part of the common contemporary vernacular, considering that the playwright would probably want to use a recognizable metaphor so as not to befuddle the general audience):

If she has the mopus's, I'll have her, as snug as a bug in a rug. (Mopus being a slang word for "money," naturally.)

A 1772 epitaph penned by American statesman and philosopher Benjamin Franklin, memorializing a Miss Georgina Shipley's pet squirrel, is also often cited as an early example. In a letter to this family friend, Franklin writes:

Here Skugg / Lies snug, / As a bug / In a rug. (Skugg is believed to be a nickname for the squirrel.)

Earlier use of a "snug as…" construction is "He sits as snug as a bee in a box, making his honey," which is from The Wooden World Dissected: In the Character of a Ship of War authored by Edward Ward in 1706. A similar phrasing goes back even further: "… let us sleep as snug as pigs in pease-straw," which is from a 1603 tragic play by Thomas Heywood titled A Woman Killed with Kindness.

Snug itself has nautical origins. It was first uncovered as an adjective in the 16th century to describe the trim, neat, compact design of a ship or its parts that made it seaworthy or to indicate that a ship was adequately prepared for a voyage or riding a storm out. English novelist Daniel Defoe illustrates the latter sense in his 1719 novel Robinson Crusoe (alternatively, as well summarily, titled The Life and Strange Surprizing Adventures of Robinson Crusoe, of York, Mariner: Who Lived Eight and Twenty Years, All Alone in an Un-inhabited Island on the Coast of America, Near the Mouth of the Great River of Oroonoque; Having Been Cast on Shore by Shipwreck, Wherein All the Men Perished but Himself. With an Account how he was at last as Strangely Deliver’d by Pyrates. Written by Himself.):

… the wind increased, and we had all hands at work to strike our top-masts, and make every thing snug and close, that the ship might ride as easy as possible.

In time, the adjective was extended in meaning to indicate that a person had a neat or tidy appearance or that a piece of clothing fit closely but comfortably. The meanings of snug that suggest warmth, comfort, ease, and quiet contentment are already cozy in the English language by the 17th century in contexts referring to being snug in places like a hideout, a cabin with a warm fire, or in bed.

The verb snug evolved shortly after the appearance of the adjective in the 16th century with the meaning of "to lie close" (as in "snugging up/together for warmth or in affection), and that sense eventually led to the formation of the familiar verb snuggle by the wrap-up of the 17th century.

The element bug in the expression "snug as a bug in a rug" is from Middle English bugge, which originally referred to either a scarecrow or a hobgoblin.

The quote is John Wycliffe's 1382 rendering of the sixty-ninth verse of the sixth chapter of the (Apocryphal) Book of Baruch. When the Douay Version of the Old Testament was published in 1609, the "bugge ... in a place where gourdis wexen" had become "a scarecrow in a garden of cucumbers." The word bug in reference to a scarecrow fell into disuse. That it still named a hobgoblin, William Shakespeare's Hamlet's "hoo! such bugs and goblins in my life" indicates.

In the late 16th century, the word bug was used to refer to insects, and especially to the bedbug (a small insect that lives in beds and that bites people and sucks their blood while they're sleeping—pretty disturbing; it was so-named bedbug in the first half of the 18th century). For example, in Philip Massinger and Thomas Dekker's 1622 tragedy The Virgin Martir, the characters Spungius and Hircius, servants of Dorothea (the virgin martyr), are tempted by Harpax, an evil spirit in human guise, to desert Dorothea and the Christian faith to which she has converted them:

The threat of bedbugs, however, is nothing to Harpax, and Spungius and Hircius are won over.

Etymologies of the word rug suggest that it is probably of Scandinavian origin. Quite possibly, it is related to Norwegian dialect rugga, meaning "coarse rug," since early uses of rug in English refer to a type of rough, woolen clothing fabric popular in the 16th and 17th centuries; however, the fabric was generally manufactured in Ireland or Britain, which gives reason for the "probably" in etymologies.

Besides clothing, rug was a fabric for making blankets and wraps used as bedding or simply to keep warm—hence, the synonymous use of rug for lap robe, which refers to a blanket for the legs, lap, and feet used by a traveler. The common sense of rug referring to a thick, heavy material intended as a floor covering originated later, about the early 17th century.

To wrap up (get it?): being a bug under a floor rug is hazardous, since being squashed is likely; being a bug snugged warmly under a bed's "rug" with an ample supply of sustenance, such as blood from a sleeper, is less risky and a bit more satisfying. So in that regard, the expression "snug as a bug in a rug" makes sense, sort of—additionally, insects do tend to seek safe, covered areas when in danger, and many bugs do like warmth (they tend to invade houses during cold months). But the rhyming in the expression should also be considered. Rhyme is more likely the reason bug was introduced into the phrase "snug in a rug," as in reality, the bug is in a rather precarious position (especially in a home with cats). Either way, we hope you're enjoying this under copious layers and with a mug of something hot.

MORE TO EXPLORE: 'When Pigs Fly' and Other Barnyard Idioms