The words that defined the week of November 9th, 2018 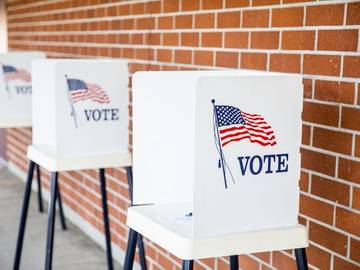 Sorry, we're all out of stickers.

This past week many of our most looked-for words appear to have been driven by politics. This is the point in the article where you, the reader, say something along the lines of “But you said that last week, you silly dictionary! And the week before that.” And then comes the part of the article where we, the dictionary, exhale with an air of exasperation so pure and deep that there are no words within our pages to define it, and say “Yes.”

In any event, the midterm elections of the United States took place last week, and millions of people headed to the polls to vote for new senators, members of congress, governors, and various alderman and alderwoman types of positions. Here are some of the political words that drew considerable interest from our users.

Gubernatorial (“of or relating to a governor”) was high in lookups in the days around the election, as a number of races which this adjective could modify proved to have unexpected, noteworthy, or thrilling results. If you are one of the people who said the word gubernatorial out loud a few times and found that you liked it, there is a chance that you started wondering why you can’t call governors gubernators. You can! Unless you want to instead call them gubernatrixes. Both of these words are now uncommon and little known (and more often simply mean “ruler” than “governor”), but although you may lose some clarity in your speech you will make up for it by the additional humor of using words that begin with guber-.

So that, that incomprehensible Gubernator that seems so instable to us, is most stable in respect of himself.
— Anon. Eliana, 1661

Behold the powerfull majesty of Gods mother, Commander of her Sonne, equall to the Father, Wife to the Holy-Ghost, Queene of Heaven, Protector of An|gels, and sole Gubernatrix of the Earth.
— William Lithgow, The Totall Discourse, 1640

Bellwether was particularly high in lookups on Tuesday. The word is a blend of bell (the kind that you ring) and wether (“a male sheep that has been castrated”). If you do not quite understand what ringing bells and castrated sheep have to do with the political landscape of the United States let us be the first ones to say that the modern system of education has done you a grave disservice. Wait, scratch that … it is perfectly normal to not know what these things have to do with politics. One of the earliest senses of bellwether is “one that takes the lead or initiative,” based on the habit of shepherds of yore placing a bell around the neck of a wether, who would then lead the flock. The word then came to take on the additional meaning “an indicator of trends.” This later sense is the one much beloved by pundits and other people who are paid to appear knowledgable about what will happen in elections.

Incumbent also had a moment of glory in the aftermath of the election. When it first entered English, in the 15th century, incumbent referred to someone who occupied a benefice—a paid position in a church. These days, in the American political system, incumbent generally refers to someone who is the current holder of a position during an election to fill that position.

Alexandria Ocasio-Cortez in New York, 29, a Latina who defeated incumbent Joseph Crowley in a decisive primary, is set to become the youngest House member ever elected.
— Mary Jordan, _The Washington Post (Online), 7 Nov. 2018

Incumbent comes from the Latin incumbere, meaning “to lie down on.” It shares the “lie down” portion of this root (-cumbere) with a number of other English words, including recumbent (“suggestive of repose”), succumb (“to yield to superior strength or force or overpowering appeal or desire”), and accumbent (”leaning or reclining especially at meals”).

Jefferson Beauregard Sessions III is destined, if our data give any indication of such things, to long have his name associated with the word recuse, as this past week saw the third time that a major spike in that word’s lookups was associated with the former senator from Alabama. Sessions is also now the former Attorney General of the United States; the end of his tenure in this role was thought to have been influenced by his recusing himself from overseeing the investigation by Robert Mueller. If you would like to read more of Sessions’ earlier recuse hits you may do so here and here.

For our antedating of the week we will remain mired in the filthy mud of political squabbles, and look at the word recount (there will be at least one, and possibly several recounts taking place after close voting counts in Tuesday’s contests). Recount has been used as a verb, with the meaning “to relate in detail, narrate,” since the 15th century, and meaning “to count again” since the middle of the 18th. But until recently our earliest known use for the noun (“a second or fresh count”), which is now so applicable to evenly divided elections, occurred in 1850. Recent findings show that we had been having recounts decades before this.

The question was then taken on striking out—ayes 69, noes 45. The Chair voting in the negative, and the proposition is not carried. But Mr. Gloyd calling for a re-count, it was found to be carried, ayes 47, noes 44.
— Lynchburg Virginian (Lynchburg, VA), 18 Jan. 1830

There is something strange about the counting of votes at the recent election in Philadelphia. In every case, where there has been a recount, large errors have been discovered.
— The Baltimore Sun, 14 Nov. 1842