Should You 'Quit' or 'Resign'?

A word for when you're outta there

Is there a difference between whether one quits or resigns from a job? What about between retire and abdicate (or is it abnegate)? When leaving one’s place of employment, especially when the leaving is voluntary, it is important to choose the right word to describe this departure, and Merriam-Webster is here to help. 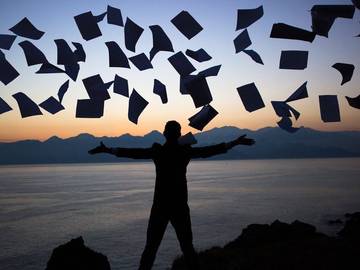 'Resign' is often used in more formal settings, or in phrases like "resigned in disgrace" or "resigned in protest."

Both quit and resign are relatively old words, having been in English use as verbs since the 13th and 14th centuries, respectively. They did not start out as synonymous as they are today; the initial meaning of quit was “to pay up” (as a debt), a sense which is now little encountered.

If a man go to prison, and be able to say, I know I shall be bayled, I have one who will quit my debt, and enlarge me, such an one fears not the Prison.
— Ralph Brownrig, Twenty Five Sermons 1664

The initial meaning of resign (“give over or desist from”) was also notably different from how it is commonly used today. Both words enjoy a variety of possible meanings, and the sense of resign meaning “to give up one's office or position” has been used since the late 14th century. The common pairing of resign with from appears to be largely American, and not in widespread use prior to the 18th century.

Newes here be noon, but that Sir Thomas More hathe resigned the office of the Chaunceler, and the parlament is proroged untill the 5th day of Novembre.
— Edwarde Foxe, Letter to Thomas Benet, 16 May 1532

When used today to refer to the action of leaving employment or a position these words carry similar meanings. However, many people hold that it is well-nigh impossible for any two words to mean the exact same thing, since there are often semantic subtleties and differences in register that distinguish between words. For instance, it is not at all wrong to say that someone quit a job in disgrace, but it is far more common to use resign in this setting.

Resign is also encountered more often in formal settings; our Unabridged gives the definition of “to give up, relinquish, or forswear one's office, rank, membership, post, or charge especially formally and definitely — often used with from” as one of the verb’s intransitive senses. You may quit a job, position, or membership in protest, but, as with disgrace, this particular word is more likely to be paired with resign. Again, there is not a great difference between the two not-gonna-bother-with-this-mess-anymore senses of these words, but if it makes you feel better you may think of resigning as quitting when it puts on a bowtie; tidied up and starched, and occasionally a little more formal than it needs to be.

What of retire and abdicate? These words are less likely to be confused with quit and resign, although there is the potential for semantic overlap. Retire may mean “retreat” or “recede,” but the sense with which we are concerned is defined as “to withdraw from one's position or occupation; conclude one's working or professional career.” Abdicate, on the other hand, is defined as “to renounce a throne, high office, dignity, or function.” It would be awkward to say that a royal figure retired from their throne, much as it would sound odd to tell people that you have abdicated your position at the job you just left. And while both abdicate and abnegate may be used in reference to relinquishing something, the former is used primarily with responsibilities, offices of power, and positions; the latter tends to be used in reference to relinquishing such things as rights, beliefs, and ideas.

Whether you choose to do any of these things while causing a scene is entirely up to you.

MORE TO EXPLORE: 'Coworker' vs. 'Colleague': What's the difference?