Today, colleague is used more often in professional contexts, sometimes referring to people who work in the same field but not for the same institution, whereas coworker tends to be used for people who share a workspace or duties.

By convention, we don’t give etymologies for obvious compound words (breadboard, daytime, salesman) or those partly composed of common affix forms (solderless, fraudful, preload), since the histories of such words' respective parts are found elsewhere in the dictionary. If the compound was formed in another language before it came to English, on the other hand, then the etymology is shown (prejudge, companion). This is a legacy of print dictionary production (it saved a lot of space on the page), but isn’t always convenient or helpful today. 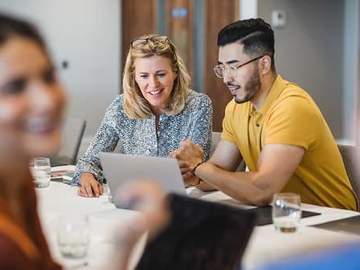 Could this article have been an email?

The Roots of 'Coworker' and 'Colleague'

One of the helpful things about etymology is seeing the plain and independent original meanings of the various parts of a compound word. For example, the co- of coworker is from the Latin word com, mean “with” or “together.” Depending upon the spelling of the word that it’s joined to, this prefix in English is sometimes is also spelled con-, col-, or co-.

This gives coworker a pattern parallel to that of colleague, which begins with the same Latin prefix com-, here spelled col- to combine with the Latin verb legare, meaning “to choose” or “to send as deputy.” Other etymological cousins include delegation (“a chosen or deputized group”) and legacy, (originally, “the office or position of a legate or deputy,” later, “something sent or bequeathed”).

The com- in companion is also a parallel use of this prefix. If a coworker shares “work” with someone and a colleague shares the duties of an office for which they were “chosen” together, a companion is the person one shares “bread” (in Latin, panis) with.

Unlike these Latin word parts, worker is just the noun formed from the Old English-derived verb work, so coworker combines a Latin prefix with a word derived from Old English roots—a common blend of the different language families made in early modern English.

'Coworker' and 'Colleague' Through History

While it’s true that the meanings of the words colleague and coworker are very similar, evidence of their usage, while often overlapping, shows slightly different contexts for each.

First, colleague is the older word, dating back to the 1500s with use essentially identical to the way we see it today. It was initially used in English to refer to people who had the same jobs or positions relative to those who chose them, beginning with saints and apostles and bishops, making it clear that from the beginning that colleague was not used for employees or laborers but for people who were chosen for some position of distinction or authority.

Coworker was more rare, but starting in the late 1500s it was used in a very particular way, also nearly always with reference to religious or ecclesiastical contexts, but not at all the way colleague was being used. Typical examples from the 1600s include:

Christ hath no coworker with him

Coworker and grace seem to occur together frequently during this period, showing that the Biblical sense of “the works of God” where works means “performance of moral or religious acts” is what is being referred to, rather than work as a synonym of labor, the way the word is usually used today. Indeed, the oldest use of worker is “maker or creator,” with explicit reference to God. In the King James Bible, worker is most frequently used in the phrase “workers of iniquity,” meaning “sinners,” although there are also references to actual labor, but in far fewer instances. The connection of worker to labor was weaker for English speakers of four hundred years ago than for us today.

Clearly, after the industrial revolution, coworker has gained in usage connected with labor and employment. Today, colleague is used more often in professional contexts, sometimes referring to people who work in the same field but not for the same institution, whereas coworker tends to be used for people who share a workspace or duties.

A look at the words commonly used in close proximity to each shows that they are used in different contexts. Words closely associated with colleague are:

Words closely associated with coworker are:

It is typical for Latin-derived words to be used in a more technical, official, or abstract way than their Old English-derived near synonyms, and while that division is true today in the usage of colleague compared with coworker, it’s an odd circumstance that in this case worker originally meant "performer of miracles." There aren’t many ideas that are more abstract than religious miracles, but English works in mysterious ways.