Party hearty is the original idiom used to describe someone capable of partying for a long time and having fun. Soon after the phrase was coined, it was misheard as party hardy which implies the same thing. "Hearty" itself refers to good health and ability, while "hardy" implies a boldness or capability to withstand tough conditions.

Do you "party hearty" or "party hardy"? Or, perhaps, you do both, and celebrate, drink, eat, and have a good time with resiliency into the midnight hours?

… he's refrained from contacting any of the folks back home … while single-mindedly stoking his stardom, entertaining millions, and partying hearty.
— Joe Leydon, Variety, 17 Jan. 2018

Though Halloween isn't technically until Wednesday, that doesn't mean you can't party hardy or take advantage of the serious flow of candy this weekend in preparation.
— Isaac Hale, The Daily Herald, 25 Oct. 2018 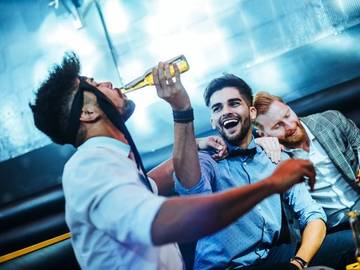 Go ahead, pretend it's not Tuesday.

The adjective hearty refers to doing things heartily—and, yes, you can "party heartily," too, but that expression is less common. (You can also "party hardily," but, again, that is not often seen in print—it's just heard in the wee hours of partying hearty.)

If you're partying hearty, you're more than likely enjoying yourself at the party and making a fun time for others. Hearty also expresses that you are in good health and have the will and ability to consume the large amounts of food and drink (hence, "hearty appetite") at the party. Hardy, on the other hand, implies being bold and audacious, as well as being able to withstand hard things (like another dozen hot wings or another round). These are all qualities that enable one to "party hearty" and/or "party hardy." Although the phrases are synonymous, their base words are not, by definition.

Hearty is obviously related to the English word heart (in Old English, it was heorte), the name of the organ in your chest that pumps blood through your veins and arteries (and that keeps you alive to party on), and has figurative meanings derived from the idea that the heart is the seat of kindly feelings. Hardy, on the other hand, is firmly based on hard, from Old English heard, meaning "solid and firm," and is often heard in the phrase "hale and hardy" to describe people in good health or is used to describe plants that can withstand extreme conditions (or people who can be out from happy hour to closing time). What might be surprising to some people is that "party hearty" was the original expression, which dates from the mid-1900s in American English.

It was likely formed from the process of reduplication—that is, people began rhyming party with hearty, and it caught on. In short time, hardy was misheard for hearty (just to be clear: hearty and hardy are not homophones), which created the eggcorn "party hardy" and which, itself, led to the common variant "party hard."

In a 2013 email instructing employees not to party too hard during a retreat in Miami, Kalanick summed up the ethos: "We do not have a budget to bail anyone out of jail. Don't be that guy."
— Jessica Hempel, Wired, May 2018

"Party hearty" and "party hardy" are not grammatical (although "party hard" is, as hard is an adverb that brings the proper grammatical unit to the party). Both hearty and hardy are adjectives, which means they should be modifying a noun or another adjective, but they instead modify the verb party—adverbs modify verbs. So the expressions are considered idioms that break the rules of grammar, but, you know, "it ain't a party till something gets broken."

At the beginning of the night, you might "party hearty," but after hours you might be said to be "partying hardy." And, if you are, we just hope you don't find yourself under the table when the sun rises. Better grab a glass of water now for good measure.