Nuclear family refers to the core members of a family, usually parents and children. Nuclear had a long history of figurative use before its main association with "nuclear energy," as nucleus has senses meaning "kernel" or more simply "something essential."

Grandparents are grand; great-aunts are great; and nuclear families are … nuclear?

Well, yes. Nuclear families—the term refers to a family group that consists only of parents and children—are nuclear but in a sense of that word that's now much less common than today's most common uses of nuclear. 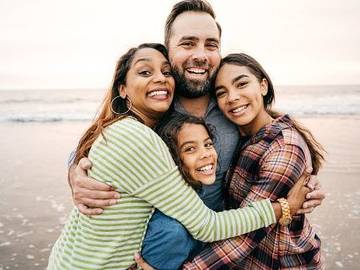 It has nothing to do with melting down.

Nuclear family dates to the 1920s, when the academic fields of anthropology and sociology were both still young. The Oxford English Dictionary cites Bronisław Malinowski, considered a founder of social anthropology, as the coiner of the term.

At the time nuclear family was coined, the word nuclear inhabited contexts other than those most familiar to us now. Its use was broad and tied, as it still is, closely to uses of its parent word, nucleus, which had been a member of the language for 250 years.

Many Uses of 'Nucleus' and 'Nuclear'

Tracing the development of the word nucleus in the Oxford English Dictionary, we see that it was first applied in English in the mid-late 17th century to the brightest mass of matter in the head of a comet. Its origin is New Latin, from Latin nucleus, meaning "kernel." Other astronomy meanings followed, with the word referring to other bright and dazzling celestial sights, such as the relatively small, brighter, and denser portion of a galaxy, or the hot faint central star of a planetary nebula.

By the early 18th century, nucleus described other more earthly kernels in the fields of botany and pathology too, with a wide range of scientific applications active by the mid-19th century, including the one we all learn at some point from a science teacher, about the little ball at the center of an atom: that is, as this dictionary puts it, "the positively charged central portion of an atom that comprises nearly all of the atomic mass and that consists of protons and usually neutrons."

That meaning of nucleus is the source of most of the nuclear compound terms we have today, which typically relate to the nucleus of an atom—for example, nuclear membrane—or to the energy that is created when the nuclei of atoms are split apart or joined together—nuclear energy, nuclear fission, nuclear reactor. But the word nucleus didn't start referring in any concrete sense to atomic nuclei until the early part of the 20th century; for the preceding decades that meaning was a speculative one, based on unconfirmed ideas about atoms. Nuclear as we now most often encounter it is very much a child of the second half of the 20th century. At the time of Malinowski's coinage, the idea of atomic nuclei as actual entities was nascent.

The nuclear in nuclear family is figurative, and it comes from an extension of those varied scientific applications of nucleus. In addition to the astronomy, botany, and other technical applications, nucleus has also since the mid-18th century meant simply "a basic or essential part," with many examples of the term describing people considered core to some organization or effort. In coining nuclear family, Malinowski was hitching a sensible descriptor to the word family to create what is now one of our basic familial designators. No one could have known at the time that that descriptor would go nuclear.