Ah, family. We know who some of them are—hi, Mom and Dad, Sis and Bro, Aunt Kimmie and Uncle Kyle, Cousin Sue, Cousin Sal.

Sometimes, though, you meet someone you're supposedly related to, but neither of you really knows quite what the relationship is. You stand around speculating on just who you are to one another and throw terms around: third cousin?, second cousin once removed?, step-half-grand-aunt? 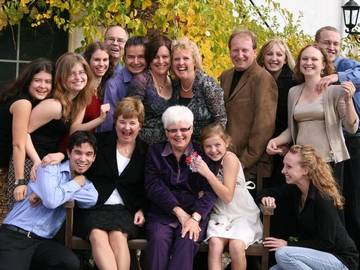 Half of these people just met today.

Where it really gets muddled is in the territory of cousins. As we've already mentioned, a first cousin is the child of one's aunt or uncle. You and your first cousins share one set of grandparents because you each have one parent who is a sibling of the other's.

But what about between generations? What is Sue, your first cousin, to your own child? And what is Sue's child to your grandchild? This is where the word removed comes in: a relative is "removed" when that person is of a younger or older generation.