The Difference Between 'Libel' and 'Liable'

Don't hold us at fault if you can't keep them straight.

Libel is related to defamation, generally referring to statements made about someone without just cause and exposing them to public contempt. Liable, on the other hand, is an adjective referring to the person legally responsible for something, such as a debt that is owed. The related noun, liability refers to the legal responsibility itself.

Libel and liable are two words that not only sound alike but also occur frequently in legal contexts. For those reasons, they are sometimes confused. 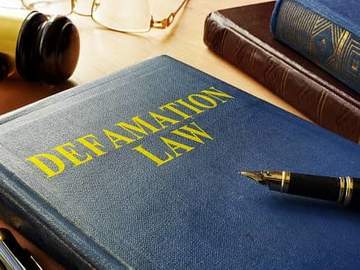 May you find neither word applicable to your life.

Libel in its most well-known sense refers to a kind of defamation; it is defined as "a statement or representation published without just cause and tending to expose another to public contempt, or the crime of doing so."

In a unanimous decision released Friday, the court agreed that reporting by The N&O and then staff writer Mandy Locke met the definition of libel set in the landmark New York Times v. Sullivan case in 1964. That ruling by the U.S. Supreme Court found that to prove libel public officials must establish that journalists acted with “actual malice” toward them, rather than simply published incorrect information.
— Richard Stradling and Will Doran, The Raleigh News & Observer, 14 Aug. 2020

Libel can also be used as a verb meaning "to make libelous statements" or "to make or publish a libel against (someone)."

Colborn alleges in his complaint that the award-winning series about Steven Avery, exonerated for one murder only to later be charged with another, libeled him by insinuating he planted evidence in an effort to frame Avery for that second murder.
— Eriq Gardner, The Hollywood Reporter, 13 June 2019

Libel is often mentioned alongside slander, another crime of defamation that refers to speech. An explanation of the difference between libel and slander can be found here.

Liable is an adjective that describes one who is legally responsible for something, such as a debt, fine, or compensation that is owed.

The Tennessee Court of Appeals struck down McAfee’s ruling, saying Big Pharma can be held liable as drug dealers and prosecutors can sue to recover damages for their respective districts.
— Jamie Satterfield, The Knoxville News Sentinel, 18 Dec. 2020

The Sioux City Council will be asked Monday to amend the city's fireworks ordinance so that private landowners can be held liable for violations occurring on their property, even if someone else discharged the fireworks.
— Dolly Butz, The Sioux City Journal, 20 Dec. 2020

If a property owner places his or her mailbox in the highway right of way, which is usually a minimum of 25 feet from the centerline of the road, the municipality that owns and maintains the road is not liable for damage to the mailbox if such damage was caused by non-negligent snow-removal operations. While the property owner may have an informal license to erect the mailbox within the right of way, this does not endow the owner of the mailbox with any legal rights in the highway when needed for highway purposes.
— Dave Werner, The Adirondack Daily Enterprise, 19 Oct. 2020

An extended use of liable not restricted to legal contexts means "exposed or subject to some usually adverse contingency or action," as in, "If you keep horsing around on that fence, you are liable to fall."

Both of these senses have a related noun, liability. Liability can refer to something for which one is held at fault or responsible ("was cleared of liability for the accident"), a debt or something similar that is owed ("keeping track of assets and liabilities"), or something that serves as an unwanted disadvantage ("his tendency to drop the ball makes him a liability in the outfield").