The Difference Between 'Slander' and 'Libel'

We'll tell you the secret

The English language is heavy with synonyms, and we have a seemingly superfluous number of words for many specific things or qualities. Some of these excesses, such as the duplicates goatish and hircine, are the result of two separate parent languages; others, such as the hundreds of words we have for drunk, are best explained with a headshake and a shrug. 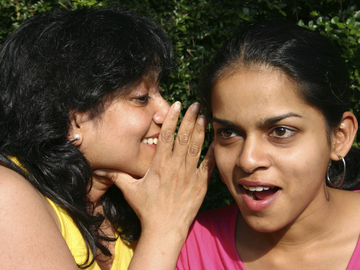 Though many people use 'slander' and 'libel' interchangeably, the words have distinct meanings—libel is written, while slander is spoken.

In many cases it makes no great difference whether one chooses a word or its synonym, except that some choices may be more elegant or appropriate for the linguistic register one is using (you might write "sorry I was so inebriated," rather than "sorry I was so sozzled," when writing a letter to your grandmother, for instance). In other cases, however, the wrong choice between two near-synonymous words may be important. Which brings us to libel and slander.

It should be noted that many people, especially when they are not writing a legal brief, or arguing in a court of law, do not distinguish between these two words, placing them both in the general semantic category of "saying or writing something untrue about someone, in order to make them look bad." However, there is a very clear difference between them.

Both libel and slander are forms of defamation, but libel is found in print, and slander is found in speech. Libel refers to a written or oral defamatory statement or representation that conveys an unjustly unfavorable impression, whereas slander refers to a false spoken statement that is made to cause people to have a bad opinion of someone. This explanation is refreshingly simple, but perhaps because it is so simple many people fail to observe the nuance. So we can make it a touch more complicated, and perhaps that will make it easier to remember.

It may help one to remember that libel is a written form of defamation if one understands that the word comes from the Latin libellus, which is the diminutive of liber, meaning "book." The earliest use of libel, in the 14th century, had the meaning of "a written declaration, bill, certificate, request, or supplication."

Slander, regrettably, does not have so informative an origin; it comes from the Latin scandalum ("stumbling block, offense"). If this etymological guide isn't complicated enough to help you remember the difference between these two words, we can always fall back on that old standby of making things even more unnecessarily complicated, and give additional guidance in the form of doggerel:

Although both of these words may betoken
That adherence to truth has been broken,
Remember this dictum,
Should you find yourself victim,
Libel is written, while slander is spoken.