'If' vs. 'Whether': Similar But Different

If and whether are often interchangeable, but have distinct uses. For clarity, it is best to use whether in reference to a choice or alternatives ("we're going whether it rains or not") and if when establishing a condition ("we will go if it doesn't rain").

In English grammar, a conjunction is a word that joins together sentences, clauses, phrases, or words. If and whether are referred to as subordinating conjunctions, which means that they are elements that form sentences into word groups called, well, subordinate clauses. As such, they have similar function, which sometimes causes hesitation on which to use. Grammarians have ruled that if and whether have distinct uses; however, they are interchangeable in their shared senses referring to the uncertainty of future happenings. That ruling is consistent with the lawlessness of English, which leads to confusion (and which we will clarify). 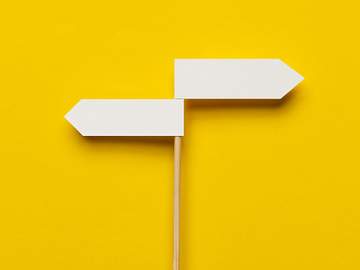 Though English will still remain chaotic, whether we clarify this issue or not.

If starts a subordinate clause of a conditional sentence—a sentence that states a relation between cause and effect, makes a prediction, or speculates about what might happen. The bare bones: a subordinate clause is a clause that does not form a sentence by itself and is connected to a main clause, which is a complete sentence. The if clause states what must occur before something else, which is stated in the main clause. It can be at the beginning or end of a conditional sentence.

Please contact us if you have any further questions.

The main clause of a conditional sentence may begin with the adverb then. This often occurs in science contexts especially in statements of logic or proofs where then is used to emphasize a relation between cause and effect: "If you eat the whole pint of ice cream, then you will be satisfied"; "If line segment p, q and r are equal, then the triangle is an equilateral." Then, in general cases, is not a necessary coupling with if.

Whether is a conjunction that usually starts a subordinate clause that expresses an indirect question involving two stated or implied possibilities or alternatives. And this is where the confusion starts: if can also be used in this sense.

I'm unsure if/whether my answer is correct. [Is my answer correct?]

She wondered if/whether his story was true. [Was his story true?]

I don't know if/whether the mail has arrived. [Did the mail arrive?]

As to why this interchange is the case, we don't have an answer. If we did, we would gladly share with you.

There is a grammatical hint that calls for whether instead of if. Whether is the one that precedes an infinitive, which is the verb form in the collocation "to + simple verb," as in "I am wondering whether to change our reservations." Whether, in this case, refers to the making of a choice, whereas if states a condition, as in "If the contestant spells the word wrong, he or she will be eliminated."

Readers might be familiar with the phrase whether or not, meaning "in any case," "without regard to or in spite of other considerations," or "whatever else is done or is the case"—for example "we are going whether or not you decide to come along." The "or not" of the phrase does not need to immediately follow "whether," but it often does: hence, "The parade will go on whether it rains or not."

There are no ifs, ands, and buts, if and whether are used interchangeably as function words to indicate an indirect question involving stated or implied alternatives and have their own uses. But (so there is a but), for clarity, it is best to use whether rather than if when referring to choice or alternatives and reserve if as the word to introduce a condition.