And elucidating 'Candlemas' on the same day

Groundhog Day is celebrated on February 2nd and dictates that if a groundhog emerges from hibernation to see its shadow, and retreats, six more weeks of winter are ahead. This tradition may have European roots and coincides with the Christian holiday of Candlemas, which was about the purification of the Virgin Mary, but also used to indicate the first signs of spring.

According to North American folklore, if a groundhog emerges from—or is coaxed from—its burrow, where it has been dreamily hibernating, on February 2 (which is about midway between the winter solstice and the spring equinox), then sees its shadow and subsequently retreats into its burrow, the sleepy rodent of the squirrel family thereby presages six more weeks of wintery weather. Accordingly, no appearance of a shadow means, inexplicably, an early spring, which the squirrelly rodent uncannily has promised because it wasn't frightened by a shadow—but, according to historical records, don't put away the snow shovels too soon. 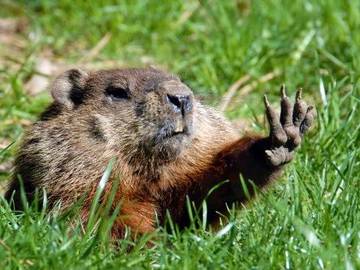 The Origins of Groundhog Day

This custom of trusting a hibernating animal to prognosticate the arrival of spring is believed to have European roots and, incidentally, falls on the same day as the Christian feast of Candlemas. In both events, light is significant: it creates shadows and guidance. Allow us to elucidate.

Groundhog Day was officially recognized in the United States during the late 1800s and was popularized in Punxsutawney, Pennsylvania, by news media. As decades of repeated stories tell, if the famous Punxsutawney groundhog ("Phil") sees its shadow on the second of February, there will be six more weeks of winter; if not, there will be an early spring. We're not meteorologists, but the science behind this forecast is questionable. You can draw the same conclusion by simply looking out a window in Punxsutawney on February 2. It just so happens that shadows occur on sunny days.

Candlemas is observed on the same day as Groundhog Day, and it commemorates the occasion when the Virgin Mary, in accordance with Jewish law, went to the holy temple in Jerusalem both to be purified 40 days after the birth of her son and to present Jesus to God as her firstborn. The festival was formerly known in the Roman Catholic church as the Purification of the Blessed Virgin Mary but is now known as the Presentation of the Lord. In the Anglican church, it is called the Presentation of Christ at the Temple in Jerusalem. In the Greek Church, it is called Hypapante (a word for "meeting"), in reference to Jesus' meeting in the temple with the aged Simeon, to whom it had been revealed that he would not die before the meeting of the Messiah. Since ancient times, a procession of lit candles has observed the day, whence the name Candlemas, and the observance comes from Scripture deeming Christ as "a light to lighten the Gentiles, and the glory of thy people Israel."

Candlemas and the Arrival of Spring

Candlemas, given its occurrence in the beginning of February, also became a day on which people would prognosticate the arrival of spring according to its sunny or cloudy skies, as the lyrics of one old English song goes, "If Candlemas be fair and bright, / Come, Winter, have another flight; / If Candlemas bring clouds and rain, / Go, Winter, and come not again." Similarly, an old Scottish rhyme is "If Candlemas Day is bright and clear, / There'll be twa winters in the year." Such verse alludes to the notion of animals—historically, groundhogs, hedgehogs, badgers, bears—deciding to end or prolong their winter's sleep according to the weather.

We leave you with some facts and a question. The groundhog is a woodchuck. Groundhog and woodchuck are both names for the grizzled, thickset marmot that is known in biological classification as Marmota monax and that is found principally in the northeastern United States and in Canada. The name woodchuck is native to America. It is believed to be an alteration of either the Ojibwa otchig or the Cree otcheck, both of which mean "fisher" or "marten."

To end, we pose this question: if the weather is "fair and bright," why doesn't the groundhog stay outside and get some sun instead of retreating to darkness? A shadow isn't all that scary.