Yes, it was an actual pie 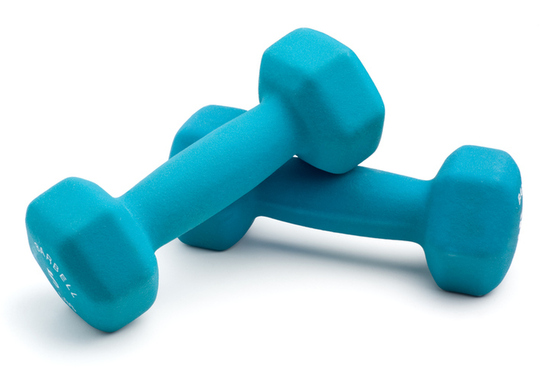 Dumbbell once referred to an apparatus whose use mimicked the ringing of a church bell. But this "bell" was a silent—or dumb—one since it was equipped with a weighted mechanism in place of a bell. The dumbbell was operated by a pulling motion and was used in learning bell ringing or for bodily exercise.

Another 18th-century dumbbell consisted of a short bar with bell-shaped pieces of lead at each end that was swung for exercise. This dumbbell evolved into the version used today consisting of a metal rod and small disc weights. 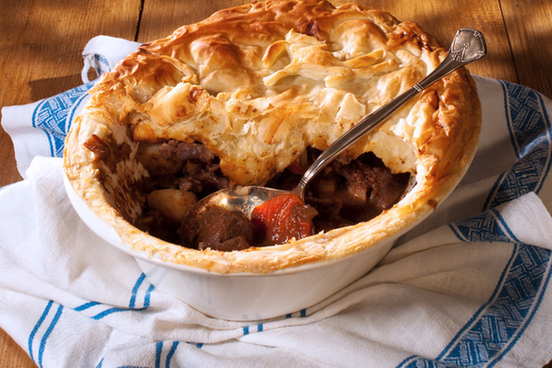 Let us suppose that you are a great Anglo-Norman baron of, say, the 13th century. You go out to hunt deer on your estate, taking with you a considerable party of friends, guests, and retainers. After you have shot a few deer, you return and the retainers butcher the animals for use. The better cuts belong to you, the lord of the manor; the rest—head, skin, shoulders,chine, and the edible viscera—are left for the gamekeeper, the huntsmen, and the servants.

Those edible viscera—liver, heart, kidneys, and so forth—were known in Norman French as nombles, a word the French had derived from Latin lumbulus, denoting a cut of meat, from lumbus, "loin." By the 14th century, nombles had passed into English as numbles, by the 15th it was umbles, and by the 16th humbles. The usual way to prepare the humbles was to make them into a meat pie—really a thick rich stew with a crust. So while the gentry were feasting on prime cuts of venison, the gamekeeper and other servants were dining on humble pie.

Today's figurative humble pie appeared about 1830, when it turned up in a book on the vocabulary of East Anglia. It was used in the phrase "make one eat humble pie," which was defined as "to make him lower his tone, and be submissive." The compiler of the book suspected that the phrase derived from the pie made of deer umbles, and in that case, he thought, it should be written "umble-pie, the food of inferiors." 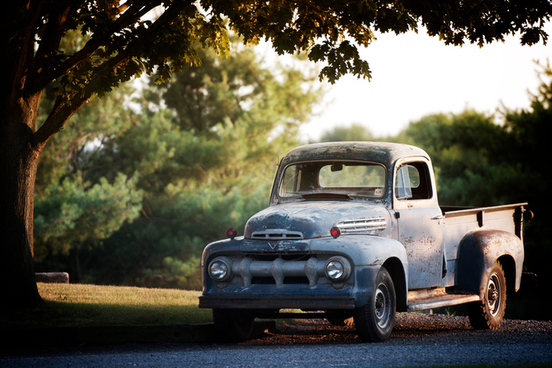 In colonial times, truck referred to two dissimilar things: bartering and a wheel. The "bartering" truck was derived from troque, the Old French word for "barter"; the "wheel" truck originated from the Greek word trochos, meaning "wheel."

Their trade is managed by truck, or bartering one commodity for another.
— The Gentleman's Magazine, 1747

Those Priests had erected a Scaffold on two Axle-trees, that had Trucks fitted for them like the Carriage of Ship Guns.
— Alexander Hamilton, A new account of the East Indies, 1727

In addition to the practice of trading, truck was used for the goods exchanged, and in the late 18th century the meaning of the word was extended to refer to a specific commodity: vegetables grown for the market. That sense was influenced by the fact that the truck that was bartered often consisted of vegetables from gardens. In the 19th century, people began to refer to the farms producing vegetables for the market as truck farms.

It was in the early 1600s that truck was used for a simple wheel mounted on the carriages of ships' guns. In the late 1700s, trucks were attached to vehicles for hauling and, as if by synecdoche, the name for the wheels began to be used for the carts and wagons themselves. Innovation motorized these vehicles, giving us motortruck in the early 20th century. 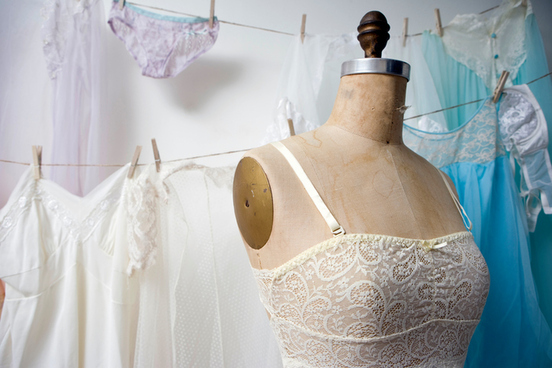 Negligee was an adjective before it became a word for a woman's nighttime garment. It was originally applied to a person who was not revealingly dressed, but negligently dressed.

Never more like an Angel than at this instant … thus negligee as you are, if I would not take you before a Dutchess … I'm a Villain."
— John Durant Breval, The Play is not the Plot, 1718

The adjective is a borrowing of the French négligé, which was later used in French as a noun meaning "a state of being unprepared," a sense that likely influenced the use of negligee as the name for an informal loose gown worn by women—and sometimes men—during Colonial times. A negligee could be worn in public, but it stood in sharp contrast with the formal dress of the time, and its simplicity suggested a state of unpreparedness and neglectfulness.

Over the decades the negligee became consigned to the bedroom and began to transform. It began to shrink and become more diaphanous and fancy, being trimmed with lace, ruffles, and fur. In time, the modern come-hither garment materialized. 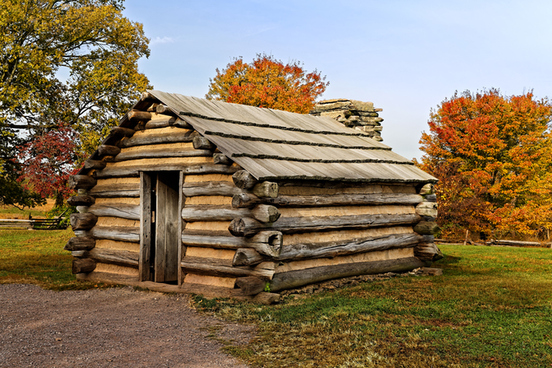 Settlers clearing land to build log cabins would often call on neighbors for help in rolling the logs into heaps to be burned. These neighborly gatherings were social events, often ending in feasting and merrymaking. By one account from 1792 the "standard dinner dish at log-rollings, house-raisings, and harvest days, was a large pot-pie."

Social logrolling brought about the proverb "You roll my log, and I'll roll yours," implying that those being helped would do the same for their helpers. In the early 19th century, this expression of mutual assistance became tainted when it was adopted by legislators in Congress for their practice of exchanging votes for votes on projects of interest to each one. "Every member ... has votes to exchange for votes," observed a writer for The Atlantic Monthly in 1869, "and it sometimes seems as if all legislation at Washington had degenerated into log-rolling."

This figurative logrolling is practiced in other circles as well where support from others is needed to further private interests. It is not unheard of, for example, of authors exchanging favorable blurbs in support of each other's books in order to promote sales and reputations. 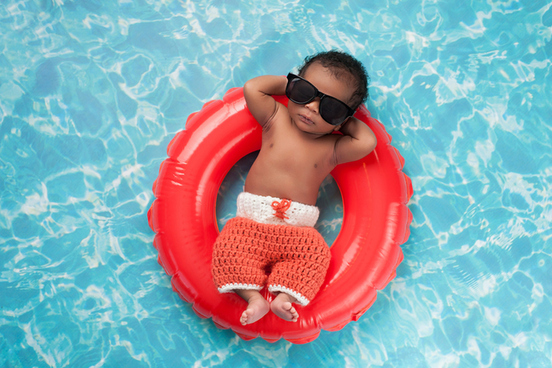 The word sass developed from a pronunciation shift involving the "au" sound in words like sauce and sausage. By the end of the 17th century, this shift meant that some English speakers were pronouncing sauce to rhyme with pass. This pronunciation was brought to the American colonies, where the spelling sass began appearing for sauce.

This word differed not only in pronunciation but also in meaning from what we now think of as sauce: it usually denoted a side dish of vegetables or stewed fruit rather than a liquid garnish. Long sass referred to carrots, parsnips, beets, and such, and short sass was potatoes, onions, turnips, etc. Plain unmodified sass often meant stewed fruit—a suggestion of that use can still be seen in the sauce of applesauce and cranberry sauce.

It was in the 19th century that sauce and sass came to be used figuratively to mean "impudent speech." Both words are still used that way; however, sass is used much more frequently for impudence, whereas sauce is usually used for the condiment. 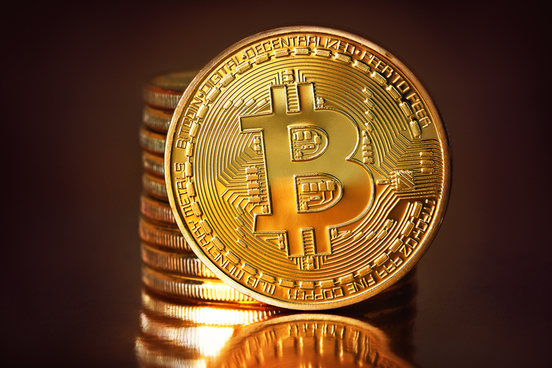 In the early Colonial period, bit had non-tech value as a word for a monetary unit and coin based on the Spanish real (pronounced "ray-AHL"), which was introduced to America in the 17th century. The origin of the word is a matter of debate. Some have argued that it derives from the practice of cutting the larger denominations of the real—especially the widely circulated piece of eight—into "bits," and assigning these fragments a lesser value. There is little doubt that this method of making change was used and that the cut sections of the coin were often referred to in terms of how many bits they were worth. However, it is by no means certain that the term bit actually derives from this practice since there is also use of bit referring to whole, uncut eight-real coins. There is also evidence that bit referred to money or coinage in a general sense before it was ever specifically applied to the Spanish real.

Bit as a name of currency fell into disuse by the end of the 18th century, but it lives on today in the adjective two-bit to denote things that are cheap or trivial. The ubiquitous computer bit of today is a blend of binary and digit that was concocted in 1948. 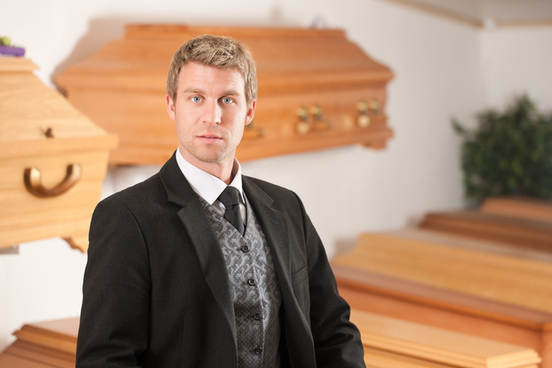 Undertaker in the sense of "one who takes the risk and management of business; a contractor or entrepreneur" was unearthed in the early 1600s. In the l7th century there were undertakers of various sorts: those who built ships and buildings, published books, produced plays and operas. The job of arranging funerals was just one of many to be "undertaken."

By the late 17th century, however, undertaker began to be specifically used for a person whose business was to prepare the dead for burial and to arrange funerals. Interestingly, there was at this time another word for someone who held this job: upholder, which fell into disuse by the 20th century. It may be that something in the general consciousness identified undertaker with a more literal interpretation of the word—a sense that undertakers actually take people under. In any case, undertaker is the name that stuck. 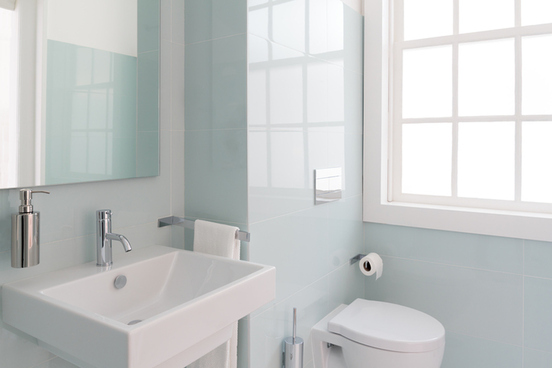 A powder room was originally a room on a ship where gunpowder was stored. The use of powder for an explosive substance, like gunpowder, dates back to the 14th century, and the nautical powder room to the 16th century. In the 18th century, powder room came to designate a room where a man or woman could re-powder their hair or wigs—a fashionable Colonial custom that definitely needed a room of its own when one considers powder's tendency to scatter when it is dispensed.

In the 20th century, the powder room became a first-floor lavatory and dressing room in a home or public establishment that was used by women to "powder their noses," an expression that became a euphemism for going to the bathroom. 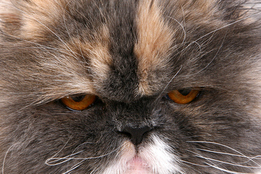 Up Next
7 Cute Words for Curmudgeons
More Words At Play