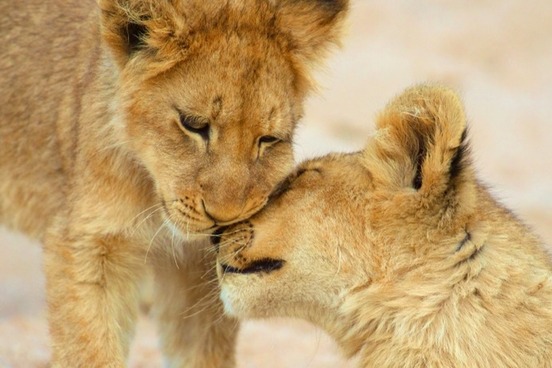 You’re sitting down and your cat comes sauntering up to you, purring—and then immediately head-butts you, hard. What gives?

Your cat is bunting. Animals will bunt for a variety of reasons, but experts say that cats do it to either mark a person or other animal with their scent. These same experts say that bunting appears to be social, affectionate behavior, and sometimes is done to get attention.

The word bunt goes back to the 1500s, where it was a dialect term used in England that meant "to butt with the head." It's an alteration of the earlier verb butt, which also means "to strike or thrust." Butt goes back to the 13th century and was first used not of cats bunting, or rams knocking their heads together, but of a child in the womb that is "stirenn and ... buttenn."

You are probably more familiar with bunt as a baseball term to refer to pushing or tapping a baseball lightly without swinging the bat. The baseball bunt is a direct descendant of the head-butting bunt. 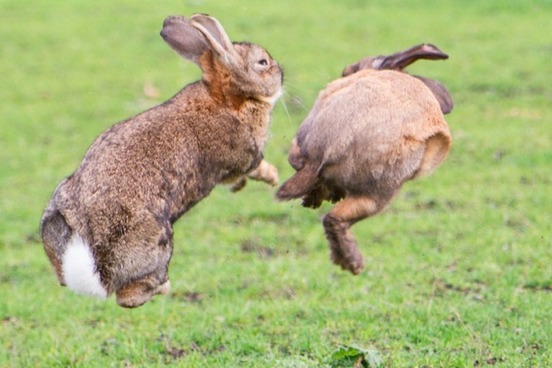 It has nothing to do with pacifiers. A binky is a big hop or jump that a rabbit does, especially a hop or jump that involves a twist of the body. They can happen suddenly or mid-hop, and new rabbit owners who witness a binky often panic that their rabbit is having a seizure.

There’s some debate over whether the binky is actually an adaptation of predator-avoidance behavior that enables the rabbit to quickly change direction while running away, or a sign of a playful, contented rabbit. And there’s plenty of debate over where the word binky came from: people claim to trace it back to Spanish, Scottish, and even the pacifier that’s called a Binky.

But according to those in the know, binky is just a fanciful description of what the twisting jump looks like. Our earliest evidence for the word is from a July 1995 post to the listserv PETBUNNY, which kept an informal dictionary of terms for rabbit owners. Binky is defined there as "A leap in the air, usually with a 180 degrees turn while in the air, and a bewildered expression upon landing." It seems to have been coined by Dana Krempels of the Miami House Rabbit Society, who is the author of the July 1995 post. 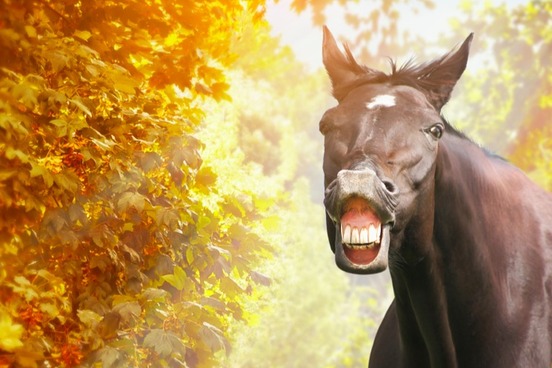 If you’ve watched horses, you might see them occasionally attempt what looks like "duckface": they stretch their heads forward and curl their upper lip up so far it covers their nose. They are not waiting for you to take a pic of them for Instagram; they are doing something called flehmen.

Flehmen, sometimes also called the flehmen response or the flehmen reaction, is actually a way of smelling or scenting the air. It's not peculiar to horses: other ungulates exhibit the response, as well as cats, elephants, and bats. Lifting the upper lip gives them access to the vomeronasal organ on the roof of their mouth, which contains chemoreceptors that help them find mates and investigate other smells in their environment.

The noun flehmen comes into English directly from German, where it is a verb that means "to curl the upper lip." The German verb was coined in the 1930s by zoologists describing the phenomenon, but it didn't come into English until the 1970s, where it was first used not of horses, but giraffes. There is an English verb flehmen, though it’s not nearly as common as the noun.

Other animals use vomeronasal organs as well—snakes particularly. 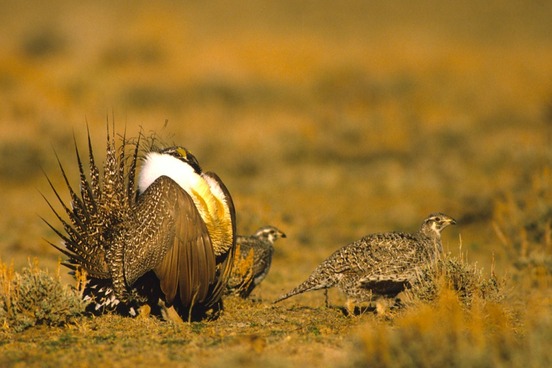 If you've ever watched a wildlife show about the flora and fauna of the American west, it’s likely you've seen some quality lekking by the Greater sage-grouse.

Lekking is the word scientists use to describe a peculiar type of mating behavior that some non-mammalian animals exhibit. Generally speaking, the males of a species congregate in one particular area and either fight (as some deer and antelope do) or do elaborate mating displays (like the Greater sage-grouse does). The females of the species sit back and watch, judging the displays to pick a mate.

The word lekking comes from the earlier noun lek, which refers to the area in which lekking takes place, or to a group of males busy lekking. But where did lek come from?

Lek was borrowed into English directly from Swedish, where it is short for lekställe, "mating ground." It was likely introduced to English audiences in an 1867 book called The game birds and wild fowl of Sweden and Norway; author Llewelyn Lloyd uses the Swedish lekställe throughout the book, either italicized or in quotation marks to signal its Swedishness, but also uses lek itself without any of the conventions used to signal that the word is Swedish to refer to both the place where these birds gather to mate, and the mating display itself. Darwin, later writing about some of the same birds that Lloyd observed, used lek in his 1871 Descent of Man ("As many as forty or fifty, or even more birds congregate at the leks. The lek of the capercailzie lasts from the end of March to the...end of May.").

The Swedish etymon that gave us lek is a compound: in Swedish, ställe means "place," and lek means both "mating" and (appropriately enough) "sport" or "game." 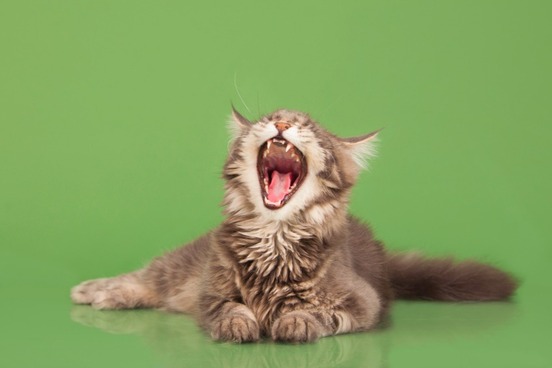 If you're familiar with caterwaul at all, it's likely in reference to loudly protesting or complaining about something, as in "They heaped abuse on him, caterwauling at a performance they dubbed 'Macdeath' and 'Macflop'" (Fred Hauptfuhrer, People, 6 Oct. 1980). But the original caterwaul is a little more primal.

Caterwaul came into English in the 1400s, and it first referred to the wailing sounds made by a cat when on the prowl for a mate. It appears to be a compound of cater, which means either "cat" or "tomcat," and the delightful wrawlen, "to wail," which is imitative of the yowling cats make while in rut.

The word seemed to perfectly capture the loud wailing, and it's no surprise that by 1600, it came to refer to a person making a loud, wailing noise. The transition was easy enough:

Then have ye and exposition also upon the seventh chapter of Saint Paul’s epistle to the Corinthians, by which exposition likewise priests, friars, monks, and nuns are taught evangelical liberty, that they may run out a caterwauling, and so woo and wed and lawfully live in lechery.
—The Confutation of Tyndale’s Answer translated into Modern English, Sir Thomas More, 1532

By 1700, the cat-related sense of caterwaul had been eclipsed by the newer "wailing" sense as well as the meaning we are more familiar with today: "to protest or complain loudly." 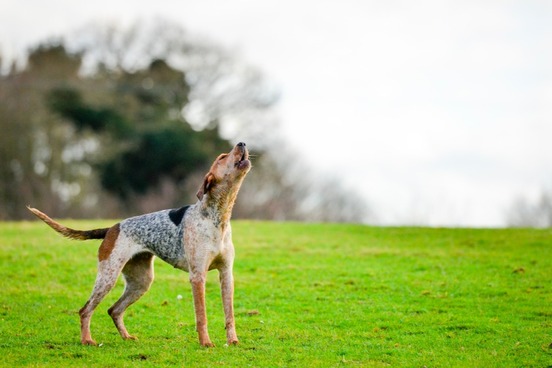 If you have a hound dog, you know that there’s a particular kind of sound they make that’s somewhere between a bark and a howl. That deep, melodious sound is called baying.

The types of dogs that bay are usually hunting dogs: they do it to announce to the rest of the pack that they’ve spotted prey. When the word bay first entered English in the 14th century, that’s exactly what it meant: to bark at prey or quarry using deep, prolonged tones. Baying (and its closely-related cousin, howling) seems to be an ancestral holdover, from when dogs lived and hunted in social packs. The word bay itself comes from the Old French verb abaien, which was coined to imitate the sound of the dog’s call.

The verb bay developed other closely-related meanings, like "to pursue prey or quarry with barking" (Shakespeare uses this meaning in Midsummer Night’s Dream: "In a wood of Crete they bayed the bear/ With hounds of Sparta"). It also came to be used figuratively of shouting ("He bayed and jeered as much as was necessary at the Prime Minister..." A. N. Wilson, Scandal or Priscilla’s Kindness, 1983) or calling for something insistently ("Now he's baying for a Senate select committee, as if this were Watergate or Iran-contra, which it isn't." Jonathan Alter, Newsweek, 24 Jan. 1994)

We also find an extended use of bay in the phrase at bay, as in "the dog kept the fox at bay." That particular noun bay refers to the position of an animal that’s been chased down and forced to face an adversary. This particular bay later broadened, and now we use at bay to refer to keeping something in check ("antibiotics kept the infection at bay") or fending off someone or something ("politicians keeping reporters at bay"). 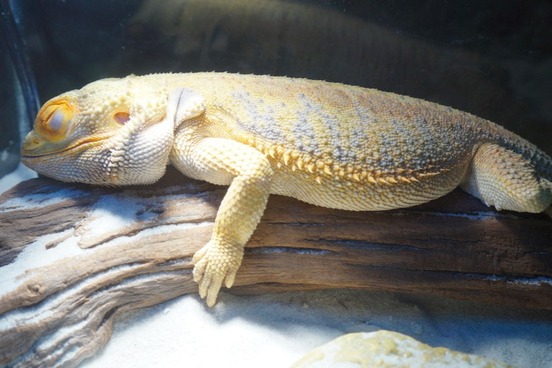 Not all animal behaviors are as active as binkying and bunting: there's brumation at the other end of the spectrum.

Brumation is a relatively new word that was just entered into our Unabridged Dictionary. It means "a state or condition of sluggishness, inactivity, or torpor exhibited by reptiles (such as snakes or lizards) during winter or extended periods of low temperature," and it's one of the few words in English that we can trace back to its point of creation.

Brumation was coined by the American zoologist Wilbur W. Mayhew in a 1965 article titled "Hibernation in the Horned Lizard Phrynosoma m'calli"(Comparative Biochemistry and Physiology, vol. 16, no. 1, September 1965). He writes, "I propose the term brumation (from bruma, L. winter) to indicate winter dormancy in ectothermic vertebrates that demonstrate physiological changes which are independent of body temperature."

Wait: isn't this basically just hibernation? Not quite. Animals in true hibernation stop drinking water and fall into a deep sleep from which they can’t be awakened, whereas reptiles in brumation still stir occasionally to drink water. Mayhew thought that, given the differences between hibernation and what reptiles did, it would be best to create a new term that is specific to lizards. 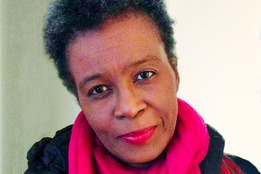