GAMES BROWSE THESAURUS WORD OF THE DAY WORDS AT PLAY SETTINGS
Word of the Day : January 8, 2020

2 : an intemperate or immoderate indulgence in something (such as food or drink)

There is an abundance—you could almost say a surfeit—of English words that derive from the Latin facere, meaning "to do." The connection to facere is fairly obvious for words spelled with "fic," "fac," or "fec," such as sacrifice, benefaction, and infect. For words like stupefy (a modification of Latin stupefacere) and hacienda (originally, in Old Spanish and Latin, facienda) the facere factor is not so apparent. As for surfeit, the "c" was dropped along the path that led from Latin through Anglo-French, where facere became faire and sur- was added to make the verb surfaire, meaning "to overdo." It is the Anglo-French noun surfet ("excess"), however, that Middle English borrowed, eventually settling on the spelling surfeit.

"The fracking boom in the United States has led to a surfeit of natural gas worldwide." — Robinson Meyer, The Atlantic, 3 Dec. 2019

"So we're keeping an eye on the next big opening, Limalimo, a 14-room lodge slated to debut in the Simien Mountains National Park in January or February. The design looks set to establish new standards: slick, sustainable (built of rammed earth and thatch), and with surfeits of natural light." — Maria Shollenbarger, The Condé Nast Traveler, 31 Aug. 2015

Unscramble the letters to create a synonym of surfeit: TATISEY. 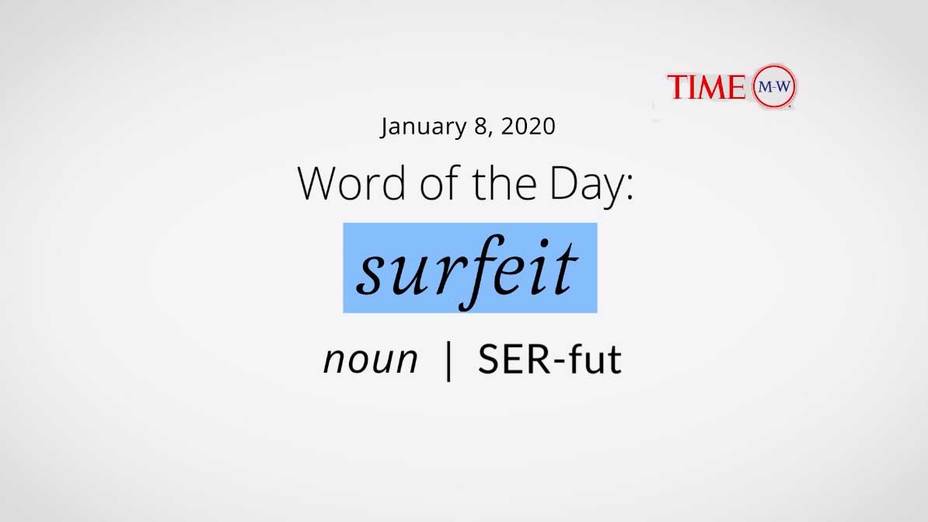 noun - an overabundant supply or an excess