GAMES BROWSE THESAURUS WORD OF THE DAY WORDS AT PLAY SETTINGS
Word of the Day : January 7, 2020

1 : to subjugate or persecute by harsh use of troops

2 : to force into submission or compliance especially by violent measures

A dragoon was a mounted European infantryman of the 17th and 18th centuries armed with a firearm called by the same name. No arm-twisting should be needed to get you to believe that the firearm's name, which came to English from French, is derived from its semblance to a fire-breathing dragon when fired. History has recorded the dragonish nature of the dragoons who persecuted the French Protestants in the 17th century during the reign of Louis XIV. The persecution by means of the dragoons led to the use of the word dragoon as a verb.

The ragtag force, composed mostly of young men dragooned from the surrounding villages, quickly surrendered to the more professional army of its foes.

"Too often, when a performer interacts with an audience, it's a cringe-fest: at best awkward, at worst humiliating for the poor spectator dragooned into serving as a prop." — Don Aucoin, The Boston Globe, 25 Sept. 2019 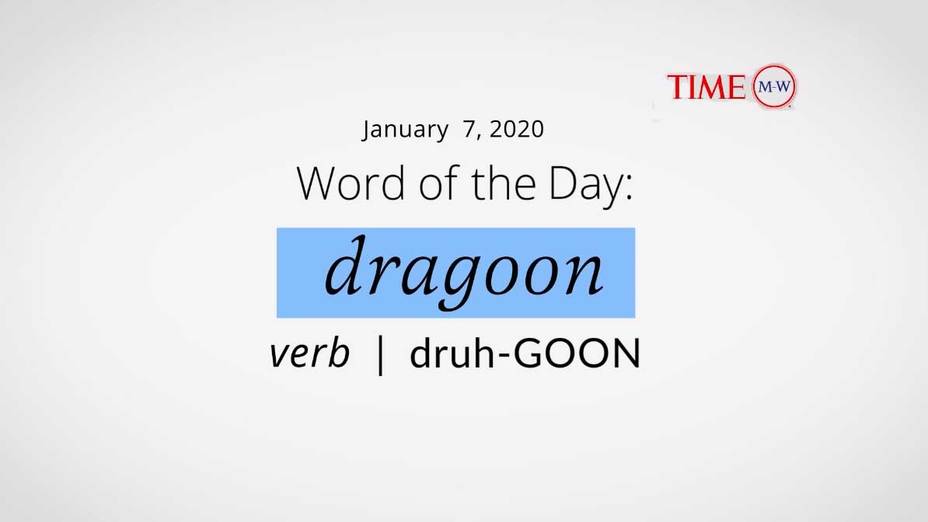 verb - to force into submission or compliance