GAMES BROWSE THESAURUS WORD OF THE DAY WORDS AT PLAY SETTINGS
Word of the Day : November 5, 2019

: with all possible speed

In the 16th century, the phrase "haste, post, haste" was used to inform posts (as couriers were then called) that a letter was urgent and must be hastily delivered. Posts would then speedily gallop along a route with a series of places at which to get a fresh horse or to relay the letter to a fresh messenger. William Shakespeare was one of the first to use a version of the phrase adverbially in Richard II. "Old John of Gaunt ... hath sent post haste / To entreat your Majesty to visit him," the Bard versified. He also used the phrase as an adjective (a use that is now obsolete) in Othello: "The Duke ... requires your haste-post-haste appearance," Lieutenant Cassio reports to the play's namesake. Today, the word still possesses a literary flair attributable to the Bard.

"You must leave posthaste," Virginia theatrically admonished her guests, "or you'll miss your ferry!"

"These goats show almost nothing of the skittishness that we tend to expect of wild, hoofed mammals such as deer and elk, which almost always flee posthaste the instant they see a person (or, often as not, given the sensitivity of their senses, they smell or hear one)." — Jayson Jacoby, Baker City (Oregon) Herald, 9 Aug. 2019

What 6-letter word beginning with "p" is used in music as an adverb or adjective meaning "at a rapid tempo"? 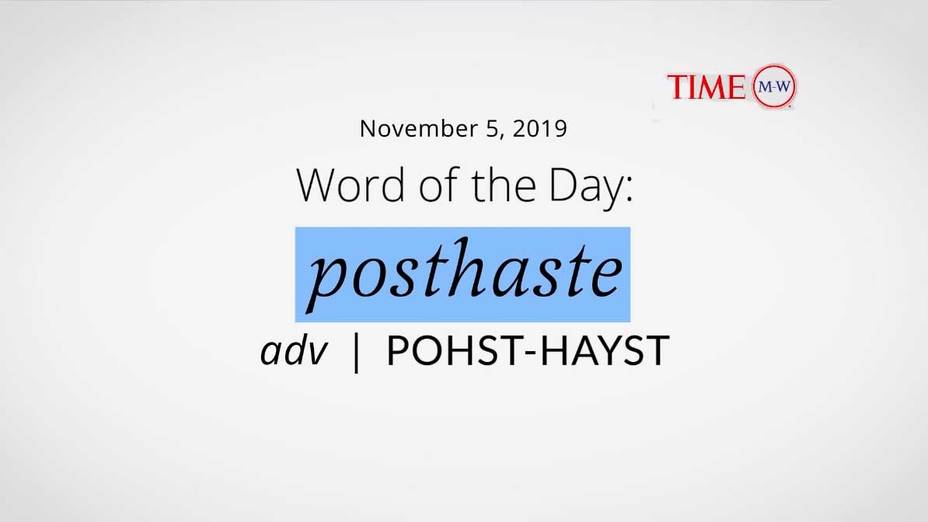 adverb - with all possible speed