GAMES BROWSE THESAURUS WORD OF THE DAY WORDS AT PLAY SETTINGS
Word of the Day : October 15, 2019

1 : a bell tower; especially : one surmounting or attached to another structure

2 : a room or framework for enclosing a bell

Surprisingly, belfry does not come from bell, and early belfries did not contain bells at all. Belfry comes from the Middle English berfrey, a term for a wooden tower used in medieval sieges. The structure could be rolled up to a fortification wall so that warriors hidden inside could storm the battlements. Over time, the term was applied to other types of shelters and towers, many of which had bells in them. This association of berfrey with bell towers, seems to have influenced the dissimilation of the first r in berfrey to an l, and people began representing this pronunciation in writing with variants such as bellfray, belfrey, and belfry (the last of which has become the standard spelling). On a metaphorical note, someone who has "bats in the belfry" is insane or eccentric. This phrase is responsible for the use of bats for "insane" (as in "Are you completely bats?") and the occasional use of belfry for "head" ("He's not quite right in the belfry").

"The mission stands a little back of the town, and is a large building, or rather collection of buildings, in the centre of which is a high tower, with a belfry of five bells…." — Richard Henry Dana, Jr., Two Years Before the Mast, 1840

"In 1963, a stone steeple over the belfry was removed after settling of the foundation compromised its integrity." — Stephen Mills, The Times Argus (Barre-Montpelier, Vermont), 12 July 2019 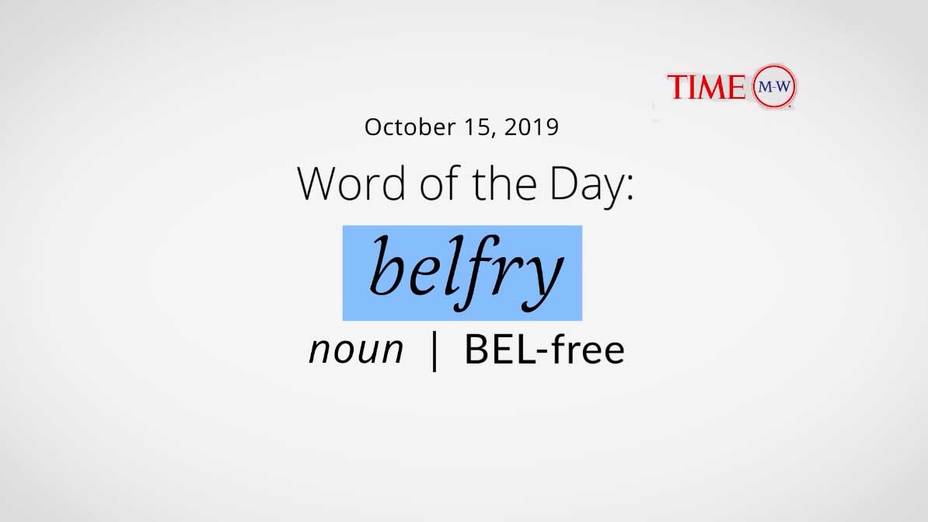