GAMES BROWSE THESAURUS WORD OF THE DAY WORDS AT PLAY SETTINGS
Word of the Day : October 16, 2019

1 : favorable to growth or comfort : mild

2 : marked by or freely expressing sympathy or friendliness

3 : displaying or marked by genius

Genial derives from the Latin adjective genialis, meaning "connected with marriage." When genial was first adopted into English in the mid-16th century, it meant "of or relating to marriage," a sense that is now obsolete. Genialis was formed in Latin by combining the -alis suffix (meaning "of, relating to, or characterized by") with genius, meaning "a person's disposition or inclination." As you may have guessed, Latin genius is the ancestor of the English word genius, meaning "extraordinary intellectual power"—so it's logical enough that genial eventually developed a sense (possibly influenced by the German word genial) of "marked by very high intelligence."

"What country seems more sensible? The even discourse, the reflexive politeness, the brilliant yet genial wit, that easy embrace of hellish cold: Canada is a rock. Canada is the neighbor who helps clean out your garage.… Canada is always so … solid." — S. L. Price, Sports Illustrated, 12 Mar. 2019

"… Sony Pictures confirmed that its upcoming Fred Rogers film will be called 'A Beautiful Day in the Neighborhood.' The announcement came by way of Twitter…, with the studio again sharing a picture of its star Tom Hanks seated on a trailer stoop in character as the genial children's programming pioneer—cardigan and all." — Nardine Saad, The Los Angeles Times, 28 December 2018

Fill in the blanks to complete a noun that refers to good-natured, easy friendliness: b _ _ h _ m _ e. 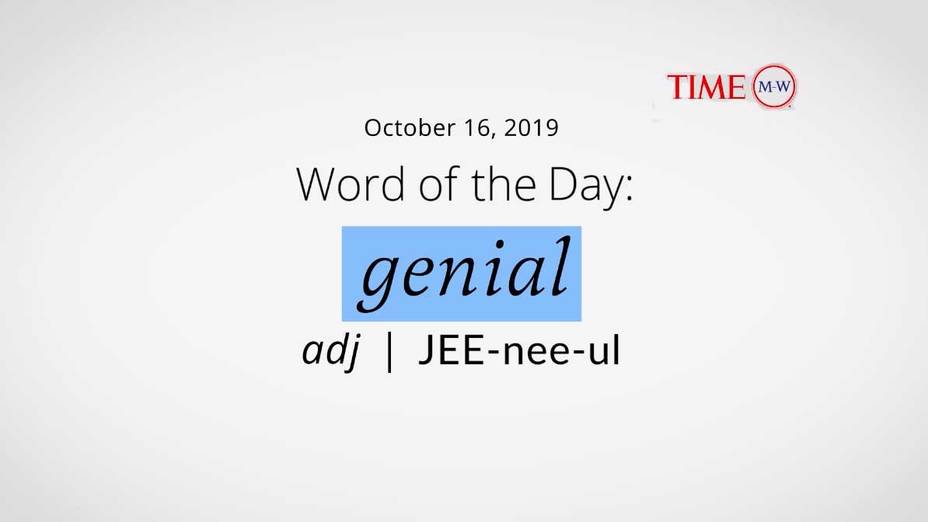