1a : to come off in sheets or scales The paint is peeling.
b : to lose an outer layer (as of skin) His face is peeling.
2 : to take off one's clothes it got hotter … you had to peel to get relief— L. M. Uris
3 : to break away from a group or formation —often used with offLike corals, the branches of sponges can peel off and reestablish themselves as new colonies. Natural History 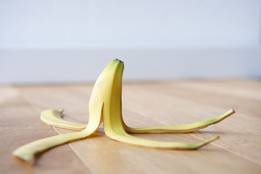 slip on a banana skin/peel

: to remove the skin from (a fruit, vegetable, etc.)
: to remove (a covering, shell, etc.) from something
: to come off in pieces

1 : to strip off the skin or bark of I'm peeling apples.
2 : to strip or tear off He peeled off his clothes down to his swimming trunks …— Virginia Hamilton, M.C. Higgins
3 : to come off smoothly or in bits The paint is peeling.

Thesaurus: All synonyms and antonyms for peel

What made you want to look up peel? Please tell us where you read or heard it (including the quote, if possible).