1
a
: the price charged to transport a person
b
: a paying passenger on a public conveyance
2
a
: range of food : diet
b
: material provided for use, consumption, or enjoyment

Verb The Mystery Maid, a halibut and black cod schooner, had fared badly of late and was in the process of being overhauled. —

David Guterson, Snow Falling On Cedars, 1994 … genuinely new creations do not usually fare well with mainstream publishers in any age. —

Lady Bird Johnson 25 Jan. 1968, in A White House Diary,  1970 residents of the flood-ravaged town are faring much better than one might have expected families can be seen faring along the road to the campground while driving or towing all manner of conveyance Noun Bush and Siberry's sixth albums find them trying harder than before to reach an audience less willing to indulge their wanderings—both albums communicate more directly, and sound more familiar, than their usual fairy-tale fare. —

Ann Powers, Village Voice, 7 Dec. 1993 Who would ever consider robbing this place for more than getaway bus fare? —

Amy Tan, The Kitchen God's Wife, 1991 As for Ronald Reagan, solid heartland fare like macaroni and cheese and hamburger soup is his favorite … —

Guy D. Garcia, Time, 14 Mar. 1988 I need some coins for the bus fare. The taxi driver picked up his fares at the airport. Less expensive fare is available at the restaurant across the street. See More
Recent Examples on the Web
Verb
The bank expects developing countries to fare better, growing 3.4% this year, the same as in 2022, though still only about half the pace of 2021. —

Time, 10 Jan. 2023 Investors have bailed out of big tech stocks and instead snapped up shares of energy companies and other defensive stocks that stand to fare better in a downturn. —

Hardika Singh, WSJ, 20 Dec. 2022 Midterm results will place into sharp relief how the White House, Democrats and Republicans are likely to fare over the next two years and lay bare the terrain presidential candidates will have to navigate. —

Brian Steinberg, Variety, 9 Nov. 2022 Agile organizations tended to fare better than their peers during the Covid-19 pandemic and have adjusted to the global talent shortage more quickly. —

Tiffany Ap, Quartz, 20 Sep. 2022 The Hmong community, who fled primarily from Laos, for example, continues to fare the worst across nearly all measures of income, compared to all other racial groups. —

Kimmy Yam, NBC News, 20 Sep. 2022
Noun
Spatial Vision will debut this year on two upcoming Asus laptops, including one Vivobook (a line that’s traditionally more price-conscious than some of Asus’ other fare). —

Monica Chin, The Verge, 17 Jan. 2023 Bar Monette, named for his wife and filling the former Little Ruby space, will serve as a wine bar and offer tapas and other fare from Italy and Spain. —

Amy Schulman, Peoplemag, 26 Dec. 2022 The Margaret bar in Birmingham has added food to its agenda, offering sandwiches and other fare with a New Orleans flavor. —

Ray A. Smith, WSJ, 20 Dec. 2022 No full menu is available yet at the restaurant, which is registered to manager-partner David Gonzalez, but should include eggs, pancakes, cinnamon rolls, mimosas and other comfort-food fare. —

Phillip Valys, Sun Sentinel, 16 Dec. 2022 If approved, the District would join Alexandria in going fare-free in the Washington region. —

These example sentences are selected automatically from various online news sources to reflect current usage of the word 'fare.' Views expressed in the examples do not represent the opinion of Merriam-Webster or its editors. Send us feedback. 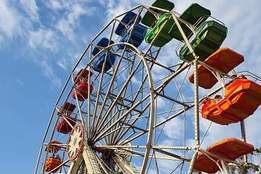 2 of 2 noun
1
: food sense 1
a café serving light fare
2
a
: the money a person pays to travel by public transportation (as a bus)
b
: a person paying a fare : passenger

More from Merriam-Webster on fare