1 : a formal act or series of acts prescribed by ritual, protocol, or convention the marriage ceremony
2a : a conventional act of politeness or etiquette the ceremony of introduction
b : an action performed only formally with no deep significance the custom had probably been long a mere ceremony— C. Thirlwall
c : a routine action performed with elaborate pomp the weekly ceremony of giving out the wages to the help
3a : prescribed procedures : usages the ceremony attending an inauguration
b : observance of an established code of civility or politeness opened the door without ceremony and strode in
Synonyms More Example Sentences Learn More About ceremony

Examples of ceremony in a Sentence

There will be a ceremony honoring the town's veterans next week. With great ceremony, the children presented each of the visitors with a gift. He told them abruptly and without ceremony that they would have to leave.
See More

These example sentences are selected automatically from various online news sources to reflect current usage of the word 'ceremony.' Views expressed in the examples do not represent the opinion of Merriam-Webster or its editors. Send us feedback.

First Known Use of ceremony

History and Etymology for ceremony

The first known use of ceremony was in the 14th century 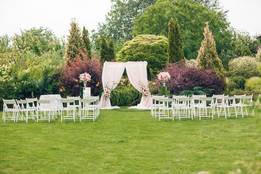 How to observe proper usage etiquette

: a formal act or event that is a part of a social or religious occasion
: very polite or formal behavior

: an act or series of acts performed in some regular way according to fixed rules especially as part of a social or religious event the marriage ceremony
2 : very polite behavior : formality "Who are you?" the lady demanded without ceremony.

More from Merriam-Webster on ceremony