1
: a preparatory design, drawing, or painting (as for a fresco)
2
a
: a drawing intended as satire, caricature, or humor
a political cartoon
b
: comic strip
3
: animated cartoon
4
: a ludicrously simplistic, unrealistic, or one-dimensional portrayal or version
the film's villain is an entertaining cartoon
cartoon verb
cartooning
kär-ˈtü-niŋ

She enjoys reading the cartoons in the Sunday paper. The kids are watching cartoons.
Recent Examples on the Web In the game, there’s a white line circling the cartoon planet. —

WIRED, 20 Jan. 2023 The launch sparked outrage as the company promoted the J.V. death machine with cartoon skulls and crossbones stylized as boys and girls. —

Prem Thakker, The New Republic, 17 Jan. 2023 Well, whoever put out the one last that depicted Prescott in a cartoon image as a deer frozen by headlights, this one’s on you. —

Jarrett Bell, USA TODAY, 17 Jan. 2023 On the soundtrack, the nattering voices and impishly pushy music of an old cartoon from the ‘30s suggests the TV has been on, with someone asleep in the vicinity, for who knows how long. —

Michael Phillips, Chicago Tribune, 11 Jan. 2023 For example, both Fitbit and Samsung have launched similar features where users are assigned a cute cartoon animal based on their chronotype and sleep data. —

Victoria Song, The Verge, 4 Jan. 2023 The Simpsons family was shown sitting down as Bart, Maggie and Lisa played instruments and a cartoon version of Ledesma was shown holding a conductor’s baton. —

Los Angeles Times, 3 Jan. 2023 Pulling a small lever gives a glimpse at a whirling orange vortex inside that looks like a cartoon version of Hell. —

These example sentences are selected automatically from various online news sources to reflect current usage of the word 'cartoon.' Views expressed in the examples do not represent the opinion of Merriam-Webster or its editors. Send us feedback. 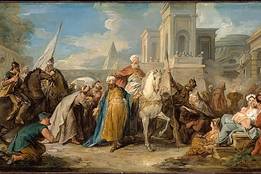 'Cartoon': Not Just For Kids

Early cartoons were not created with children in mind.

1
: a design, drawing, or painting made as a model for the finished work
2
a
: a drawing intended as a humorous comment on public affairs
b
: comic strip
3
: animated cartoon
cartoonist
-ˈtü-nəst

More from Merriam-Webster on cartoon