Xenophobia is the fear and hatred of strangers or foreigners, whereas racism has a broader meaning, including "a belief that racial differences produce the inherent superiority of a particular race." Although they are similar, they are different enough that it is possible for one to be both xenophobic and racist.

It’s never a good sign when we start seeing a massive increase in lookups for two closely related and unwelcome terms like racism and xenophobia, as is the case of late with the rise of COVID-19 and subsequent global pandemic. However, our place, as a dictionary, is not to judge the words that are being looked up (or the people looking them up), but instead to provide, to the best of our ability, as much information about them as is possible.

Xenophobia is “fear and hatred of strangers or foreigners or of anything that is strange or foreign.” Racism has a slightly broader range of meanings, including “a belief that race is the primary determinant of human traits and capacities and that racial differences produce an inherent superiority of a particular race,” and “a political or social system founded on racism.” It should be noted that the meanings of these two words are sufficiently different that a person (or thing, such as a policy) may very easily be both racist and xenophobic. 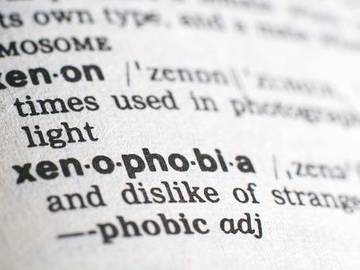 Both words are fairly recent additions to our language; newer certainly than the condition they describe. Racism does not appear in print prior to the early 20th century, and xenophobia is only a few decades older.

Here, however, as in other cases, we are inclined to think that intelligent xenomania is decidedly preferable to the Xenophobia which is of necessity and always unintelligent.
— The Daily News (London, England), 12 April 1880

It is also true that in Hungary the Nationalists are in relation with the Fascists, and call on all Hungarians to “awaken.” But in general the countries included in this survey show few signs of being seriously influenced by Racism.
—S isley Huddleston, The Christian Science Monitor (Boston, MA), 21 Oct. 1932

Xenophobia comes from the Greek words xenos (which can be translated as either "stranger" or “guest") and phobos (which means either "fear" or “flight”). There are a large number of words in English which are based on phobos (some of which may be seen here). Xenos has given us far fewer words; words from this root include xenocentric (“oriented toward or preferring a culture other than one's own”) and xenial (“of, relating to, or constituting hospitality or relations between host and guest and especially among the ancient Greeks between persons of different cities”).

Once again, while it is certainly possible to distinguish between xenophobia and racism on a number of levels, it is also possible that the words may be used almost interchangeably. Each word may also have some degree of semantic overlap with nativism, which is defined as “a policy of favoring native inhabitants as opposed to immigrants” or “the revival or perpetuation of an indigenous culture especially in opposition to acculturation.”

Please be advised that there are many words which have definitions that are not accepted, or employed, by all the speakers of a language. Racism and xenophobia are likely two such specimens, and serve as reminders of both the messiness of the human condition and the human vocabulary.