Word salad began as a term used in psychiatry to describe the nonsensical syntax of the mentally ill. Originally used by German-speaking and French psychiatrists, it came to English as a loan translation, or calque (from the French word meaning “tracing”—when a phrase from one language is translated into another). Word salad is defined as “a jumble of extremely incoherent speech as sometimes observed in schizophrenia,” and has been used of patients suffering from other kinds of dementia, such as Alzheimer’s. 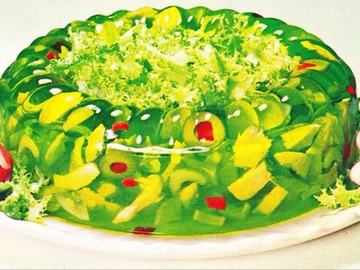 Like a salad encased in Jell-O, a 'word salad' doesn't make a lot of sense. The individual components (vegetables, words, cocktail olives, lime gelatin) might be all right, but they don't work as a coherent whole.

A more technical term for language problems resulting from brain damage or mental illness is aphasia, which means “loss or impairment of the power to use or comprehend words.” Paraphasia is sometimes used as a synonym of word salad: “aphasia in which the patient uses wrong words or sounds in senseless combinations.” Another word that is sometimes used is paragrammatism, which comes from paragram, a pun made by changing the letter the letters of a word (like saying “my sediments exactly” instead of “my sentiments exactly”).

Until recently, the phrase word salad was primarily used by specialists. In 1996, movie reviewers used it to describe Geoffrey Rush's performance as the pianist David Helfgott in Shine, and though the phrase is fairly self-explanatory, it was used in its correct medical meaning, since the character struggled with mental illness.

In recent years, however, a slightly different use of the term which means something closer to “nonsense” has emerged. This use of word salad usually reflects a judgment on the logic or intelligence of a person’s language, rather than on the person’s mental state. It has been used to refer to opaque writing, including the lyrics of new songs:

Most of it's pleasant, if forgettable, and some of the lyrics careen over into word salad.
–Playboy, 1 July 1985

Without Ward's edgy playing, a flat-lining Dylan and his word-salad lyrics sometimes get lost in lush but numbing walls of sound.
–The Washington Post, 13 November 2002

More often, word salad describes to utterances perceived by others as nonsense—especially when the speaker is trying to make a somewhat serious impression or speak about a serious topic:

Promoter Don King was celebrating Wednesday's announcement of a Sept. 22 Mike Tyson-Alex Stewart heavyweight fight when he launched into one of his patented stream of consciousness word salads, extolling the former heavyweight champion of the world.
–The Associated Press, 25 July 25 1990

Dave's talk is a word salad of Marxist jargon and Left slogans ("United we stand" and "We shall overcome").
–Film Criticism, 22 December 1999

Since political debates are frequently about the difference between sense and nonsense as perceived by one side or another, it’s not surprising that word salad has entered the political arena:

Nunberg said that in 1996 he used computer software to analyze the most repeated words at the Democratic and Republican conventions. The Republican speakers, he said, repeatedly invoked a few words and phrases: "common sense," "America," "dream," "inclusive." The Democrats, by contrast, were a "word salad," he said.
–The Boston Globe, 28 July 2004

It's remarkable when you think about it: Here the country now has what may be our first dyslexic president in George W. Bush, a lead-tongued orator who can scarcely get through a presidential address or press conference without making word-salad of his speechwriters' finest efforts.
–Arkansas Democrat-Gazette [Little Rock], 2 November 2006

COULTER: This is just a perfect example of how all you get is a word salad from democrats.
–Fox News interview with Ann Coulter, 25 May 2007

In a conversation, you have to build your sentence phrase by phrase, monitoring the reaction of your listener, while aiming for relevance to the question. That's what led Ms. Palin into word salad with Ms. Couric.
–The New York Times, 4 October 2008

Only time will tell whether this "ridiculous and incoherent" meaning of word salad will become common enough to make it into the dictionary. But it seems likely: after all, politics are unlikely to become less nonsensical anytime soon.