Getting Up to Speed on (the History of) 'Speed'

Speed derives from the Old English spēd, which referred to prosperity, good fortune, and success. This sense of speed lives on in Godspeed, which comes from the Middle English phrase God spede you (meaning "God prosper you") and is now used to wish someone a prosperous journey. 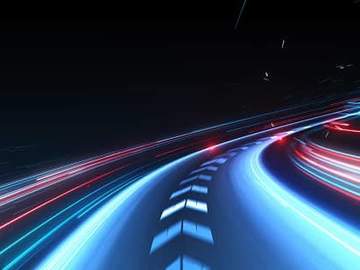 When one thinks of speed, words like rapidness, quickness, swiftness, promptness, or other similarly suffixed -ness ideas likely come to mind, with the outcome (it is hoped) one of success. The Old English spēd (the ancestor of speed) coincidentally denoted that result: it referred to prosperity, good fortune, and success itself—but not always with haste. Here are a few flashes from the past:

I pray thee, send me good speed this day, and show kindness unto my master….
— Genesis 24:12 (Authorized Version)

Now Hercules be thy speed, young man!
—William Shakespeare, As You Like It, 1599

In a word, I am assured of my speede. Such faire attempts led by a brave resolve, are evermore seconded by Fortune.
— George Chapman, Widdowes Teares, 1612

Before we bring you up to a cruising speed, we should assuage the curiosity of our wordie readers: the words speed and succeed only have the initial s and the ending -eed in common; they are etymologically unrelated.

Many Uses of 'Speed'

The run of the "successful" contributions of speed to the English language have by now sped to an end. Thus, we have labeled them "archaic." They were popular for centuries, however, especially in Scottish English. 18th-century Scot Robert Burns, for example, mentions the phrase "God send you speed" in his poem "Epistle to a Young Friend," which was dedicated to his eldest son.

Today's ubiquitous "gear," "motive," and "photography" senses of the word (e.g., "10-speed bicycle," "speed limit," "shutter speed," etc.) also have antecedents in Old English. Additionally, there are the common superlative applications in reference to high gear, as in "full speed," "top speed," "high speed," and "lightning speed." Then, there is the phrase "up to speed," on whose use we would like to brief you.

"Up to speed" begins gathering momentum during the 19th century to describe something—be it human, animal, or machine—that has the power to operate at full effectiveness or potential. The expression later picks up an extended meaning in reference to the act of giving someone all the information they need in order to be effective or the result of being so informed, or briefed—for example, "The chief was brought up to speed on the case."

The corresponding verb (which semantically evolved with the noun) started its run in Old English in the form spēdan with meanings referring to succeeding, prospering, getting along, or faring well in an undertaking. Charles Dickens gives us an example of its use in A Tale of Two Cities, penning "I should like to know how you speed." Earlier, in his 1819 historical romance Ivanhoe, Sir Walter Scott writes: "Rowena waved a graceful adieu to him of the Fetterlock—the Saxon bade God speed him, and on they moved through a wide glade of the forest." Scott's quote assumedly brings to mind Godspeed. And, yes, speed meaning "success" survives in that compound, which is used to wish a person a prosperous journey or success.

Godspeed is derivative of the Middle English phrase God spede you—that is, "God prosper you" or "God grant you success." It was originally used to wish success to someone, like saying "May you prosper"; however, these days it's more often used to express hopes for a safe trip. It is a formal and old-fashioned word, but it is fun to say as a send-off when there is a sense of risk to the endeavor.

We hope this article was just your speed. Or, if you're taking things easy, rather your cup of tea.