The Far-Out History of 'Galaxy'

When 14th century English-speakers looked up and saw a broad luminous irregular band of light stretching across the sky they saw what Geoffrey Chaucer referred to in his long dream vision poem "The House of Fame," written sometime before 1385:

Which men clepeth the Milky Wey,

For hit is whit

which they call the Milky Way,

because it is white

It's a lovely notion, for linguistically inclined mammals to imagine that the band of light stretching around the Earth is like milk, the first food to touch the tongue that eventually speaks the word. The idea of milk is in fact present in both Milky Way and galaxy: the ultimate root of the English word galaxy is Greek gála, meaning "milk." 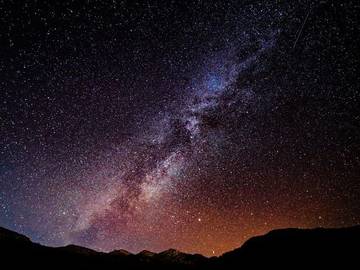 The longer version of that story is this: galaxy (which in Middle English was spelled galaxias or galaxie) was borrowed from Late Latin galaxias, which in turn was borrowed from Greek galaxías. (That word likely had an earlier form conjoined with kýklos, "wheel"). The -ias of galaxías is a noun suffix used especially of natural phenomena. The galax part of the word is from Greek galakt-, which is the stem of gála, meaning "milk."

Those of you who pay attention to etymology may be wondering about another "milk" root—the one in such words as lactate ("to secrete milk") and lactation ("the production and secretion of milk by the mammary glands"). That root is Latin lact- or lac, meaning "milk," and it's a cousin to Greek gála: they both trace back to the Indo-European *glkt-, "milk." (Lactose, which refers to a sugar found in milk, is a child of International Scientific Vocabulary, which mines New Latin for its offspring.)

We'll leave you with one other milk word: it's lettuce. The English word's likely ancestor is Latin lactuca, from lact-, lac ("milk")—probably because of the plant's milky juice.