Latinx was originally formed in the early aughts as a word for those of Latin American descent who do not identify as being of the male or female gender or who simply don't want to be identified by gender. More than likely, there was little consideration for how it was supposed to be pronounced when it was created. Nevertheless, people have attempted to assign some pronunciations to it. The most common way to pronounce Latinx is the same way you would Spanish-derived Latina or Latino but pronouncing the "x" as the name of the English letter X. So you get something like \luh-TEE-neks\. 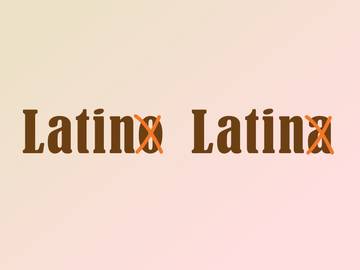 'Latinx' is a gender-neutral word for people of Latin American descent.

Latinx is used generally as a gender-neutral term for Latin Americans, but it has been especially embraced by members of Latin LGBTQ communities as a word to identify themselves as people of Latin descent possessing a gender identity outside the male/female binary.

Visibility for Latinx, the gender-neutral term for U.S.-born individuals with Latin American heritage, and Latin American artists has been on the upswing in the past few years, especially within critically acclaimed indie circles.
— Alejandra Salazar, The San Francisco Chronicle, 20 Mar. 2017

The male/female binary is inherent in the Spanish language, which lacks a neuter noun form. Thus, nouns are either masculine, generally indicated by an "-o" ending (Latino), or feminine, indicated by "-a" (Latina). The same applies to Portuguese and other Western Iberian languages.

Latinx purposefully breaks with Spanish's gendered grammatical tradition. X signifies something unknown and is used in Latinx to connote unspecified gender. A similar use of "x" is in Mx., a gender-neutral title of courtesy that is used in place of gendered titles, such as Mr. and Ms. It has been suggested that the use of "x" in Mx. influenced Latinx.

Other efforts challenging the gender binary in Spanish include the use of the slash (Latino/a) and at sign (Latin@)—the symbol suggesting inclusivity by having an "o" encircling an "a." These alternatives denote both male and female in their formation but do not include those outside the gender binary. Latinx, on the other hand, is a word free from gender in its makeup, which is why those who identify as trans, queer, or nonbinary use it to express their identity.

Though Latinx is becoming common in social media and in academic writing, it is unclear whether it will catch on in mainstream use. Nevertheless, it is gaining noticeable traction among the general public as a gender-inclusive term for Latin Americans of diverse identities and orientations.