The gender-neutral Mx. is used as a title for those who do not identify as being of a particular gender, or for people who simply don't want to be identified by gender. 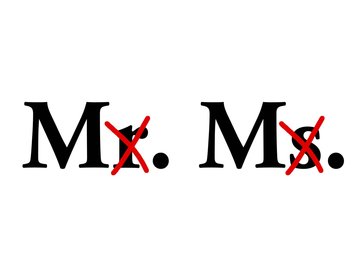 'Mx.' is a gender-neutral honorific for those who don't wish to be identified by gender. Though the earliest print evidence dates to 1977, the word has only recently become popular.

Pronounced to sound like mix or mux, the title Mx. (which, like other honorifics, is styled without the period in British English) is used increasingly on various official forms in the UK, including driver's licenses and banking documents.

Although the earliest print evidence of Mx. is from a 1977 issue of an American magazine called Single Parent, the title has not seen much official or published use in the US. It did, however, appear twice recently in The New York Times: a June 4th article noted Mx. as someone's preferred honorific, and a June 5th article all about Mx. made it clear that the June 4th use was an exception. The title simply isn't familiar enough to the newspaper's readers to be fully adopted.

It's not clear whether or when Mx. will catch on in the US. The timeline for such developments can be long, as the title Ms. taught us not all that long ago. Coined in 1901, the now-commonplace Ms. wasn't fully adopted by The New York Times until 1986. Mx. seems to be moving more rapidly—it was added to Merriam-Webster Unabridged in April 2016.