Brand-new has been used to describe completely new and unused things since the late 16th century. Brand in the word goes back to Old English and referred to a piece of burning wood. Fire-new is another 16th-century word whose meaning is similar to brand-new; it was used several times by William Shakespeare, among others. 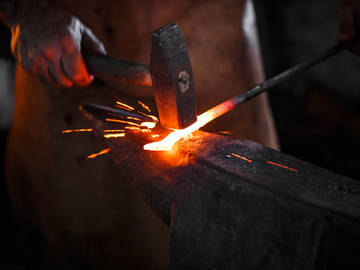 'Brand-new' goes back to the 16th century, as does 'fire-new'. Both words referred to the newness of an object fresh from the fire, forge, or furnace.

You may be familiar with the variant bran-new and the synonym span-new. Bran-new was developed in the 17th century, probably because it more accurately reflects the common pronunciation of brand-new—much like how minced meat was eventually altered to mincemeat. The variant has been preserved in literary works—Charles Dickens, Washington Irving, and Mark Twain employed the word—but it is seen infrequently in contemporary sources.

So, the happy schoolmaster put on a bran-new pair of gloves which he had carried in a little parcel in his pocket all the way….
— Charles Dickens, The Old Curiosity Shop, 1841

… his attention was happily called away by the candle-grease from the chandelier … dropping on his clothes. This he loudly complained of, and declared his coat was bran-new.
— Washington Irving, Spanish Papers and Other Miscellanies, Hitherto Unpublished or Uncollected, 1866

We got an old tin lantern, and a butcher-knife without any handle, and a bran-new Barlow knife worth two bits in any store….
— Mark Twain, Huckleberry Finn, 1884

L. Frank Baum also used the variant in reference to the Scarecrow's brains in The Wonderful Wizard of Oz, which makes one stop to think for a second about whether or not the Scarecrow ever got brains from the Wizard or just new cereal bran stuffing.

Hereafter you will be a great man, for I have given you a lot of bran-new brains.

The synonym span-new goes back to at least the 14th century and is from Old Norse spānn, meaning "chip of wood." Span-new probably developed from the idea of something being as fresh as a newly cut chip. (It is also the source of span in spick-and-span.)

… he forthwith took down from the wall a span-new little saddle….
— William Howitt, The Boy's Country Book, 1840

The black station wagon was last year's version of this year's, and I couldn't have told them apart, except that they were both obviously bran-span new.
— Madeleine L' Engle, A Ring of Endless Light, 1980

Another word that brand-new has been joined with over time is spanking. Spanking mysteriously appears in the English language around the mid-17th century. It precedes the verb spank by almost 50 years. Initially, the word was used as an adjective to describe things that are remarkable or exceptional in some way.

In time, the word developed adverbial use, which is often found in the phrase spanking new.

It is from that phrase that we have the expression brand spanking new.

Before extinguishing this word history of brand-new, a few more words must be said of its prominent base. The noun brand can refer to a mark made by burning with a hot iron. That sense is only slightly older than brand-new. It first occurs in the mid-16th century and came to refer to an identifying mark burned into the skin of criminals generally to indicate the nature of their crime. The routine branding of cattle or horses originated in the United States a century later, but it should be noted that the practice of branding property in general to designate ownership is older.

In 18th-century trade, brand came to be used for a unique mark impressed on goods to indicate origin or ownership. These brands were commonly burnt on casks of wine and on wooden or metal goods. A century later, the word developed the familiar sense referring to a class of goods identified by name as being the product of a particular maker, as in "What brand are those jean?" or "I'm trying a different brand of soap." In the early 1900s, the term brand name comes into play, followed by name brand.