Why Is 'Celtic' Pronounced Two Ways?

\SELT\ has been heard for many centuries; \KELT\, just a few.

Celtic refers to Irish culture and heritage, along with the historical people who migrated from the British Isles throughout much of Europe. While the early pronunciation was with an /s/ sound, reflecting its nearest origin in French, the modern standard is a hard "c" sound like /k/. This is because language historians desired the word to better reflect its Greek and Classical Latin origins. The soft "c" sound is usually reserved for sports teams now, like the Boston Celtics.

Be it in the pub or in the halls of academia, whenever the topic of Irish culture, language, music, literature—basically, anything Irish—is brought up, the words Celt and Celtic are bound to be heard. In modern-day English, those words are commonly used in reference to the Irish people and their widely-accepted traditions (of course everybody is Irish on St. Patrick's Day; the Celtic cross or knot is a popular tattoo; the Claddagh ring makes a nice gift). 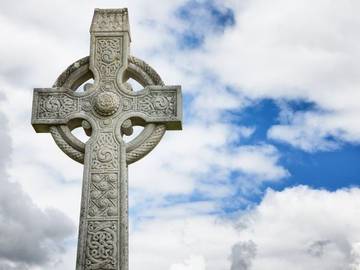 The \k\ pronunciation for Celt and Celtic dates to the 18th century.

The etymology of the noun Celt—from which the adjective Celtic is derived—is straightforward. It's a 16th-century borrowing of the French word Celte, which itself is from Latin Celta, the singular of Celtae, which is the name for a member of an early Indo-European people from antiquity who spread over much of Europe from the British Isles and Spain to Asia Minor. The Latin name is derived from Greek Keltoi, and both the Latin and Greek words referred to the Gauls, the Celtic people who occupied the region that is now France and Belgium. See? Straightforward.

With that history laid out, we're wondering how you pronounced all the capital 'c' and 'k' words, especially if you're unfamiliar with French, Latin, Greek, and even English Celt and Celtic, for that matter. The question: is the 'c' sounded \s\ or \k\?

How to Pronounce "Celtic"

Following its French and Latin predecessors, early pronunciation of Celt was actually \SELT\. (In French and Latin, the 'c' is pronounced \s\, as in the last name of the French painter Paul Cézanne and in Latin century.) The pronunciation \KELT\ started being heard as early as the 18th century, which, in time, ushered in the variant spelling Kelt. The variants were introduced by language and history academics who believed that the pronunciation of Celt should reflect the initial \k\ sound in the ancient Greek Keltoi and the Classical Latin Celtae. (It wasn't until the Middle Ages that the letter 'c' in Latin began being pronounced before vowels as the combination \ts\—prior, it was pronounced \k\; English speakers subsequently reduced the Latin 'c' to a simple \s\.) Outside of academia, the variant Kelt never caught on, and it is rarely if ever used today; however, the \k\ pronunciation for Celt and Celtic has since flourished.

Another influence on pronouncing Celt and Celtic with a soft 'c' is English's phonetic rule for 'c' when followed by 'e' (or 'i,' as in circus or Cicero), which says that, in such cases, the 'c' is usually pronounced as \s\. Think cell, cereal, ceiling, and dance. Nevertheless, English speakers, especially those who wanted to sound knowledgeable about things Celtic, grew to prefer the hard 'c' pronunciation, which harkened back to the words' ancient roots. From the 18th century onward, more and more people began sounding the words with an initial \k\. By the mid-20th century, \k\ became the norm, which is fitting since the pronunciation is in line with that of the Celtic family of languages that include Irish, Scottish Gaelic, Welsh, Breton, and the now-extinct (or, depending on who you talk to, nearly extinct) languages Manx and Cornish. Apparently, people appreciated the ethnic pronunciation.

This shift in the pronunciation of Celt is fully evinced when comparing H. W. Fowler's 1926 Dictionary of Modern English with Robert Burchfield's 1996 revised edition. Here's what Fowler had to say about Celt(ic): "The spelling C-, & the pronunciation s-, are the established ones, & no useful purpose seems to be served by the substitution of k-." Decades later, Burchfield observes a different trend: "Except for the football club Celtic (in Glasgow), which is pronounced [SEL-tik], both Celt and Celtic are pronounced with initial \k\ in standard English." Burchfield is referring to the Scottish Celtic Football Club, founded in 1887. In America, there is basketball's Boston Celtics, founded in 1946, whose name is also pronounced with an initial \s\.

The European away support that Celtic enjoys is phenomenal. Few clubs have a fanbase that travels in such numbers or makes as much noise, all the more remarkable when you consider the poor record that the club has away from home in recent times.
— Liam Kelly, The Celtic Star, 20 Feb. 2020

Aside from this use of the initial soft 'c' in sports teams' names, Celtic with a hard 'c' is the standard; however, you might still sometimes hear the 'c' softly sounded by those who are uninitiated in the history and etymology of Celt and Celtic as well as those who are unfamiliar with the words and resort to the phonetic rules of English. (And, as happens so often in English, those phonetic rules let them down.)