Whose is the possessive form of the relative pronoun who. Which and that, the relative pronouns used for animals and objects, lack a possessive form, so whose can be used for their possessive forms as well, as in "the movie, whose name I can't remember." Whose is appropriate for inanimate objects in all cases except when it might appear at the beginning of a question: while "Whose book is this?" is fine if the answer to the question is a living being, "Whose pages are torn?" doesn't really make sense. Instead, a question about a book with torn pages might be "Which book has torn pages?"

English is a pretty impressive language, but sometimes it just doesn't have the word you're looking for. Writing handbooks will tell you that the relative pronoun that is used for animals, things, and sometimes collective or anonymous people ("the book that won," "infants that walk"); which is used for animals and things ("the river which flows south"); and who is used for people and for animals, especially those treated like humans ("the dog, who goes everywhere with its owner"). In addition, whose is the possessive form of who ("she asked whose car it was").

According to the rules, whose then only applies to people and animals, so what is the equivalent possessive for inanimate objects? Truth be told, English doesn't have one, and writers from the medieval times onward have resorted to borrowing whose in such cases. The list of authors who have used whose for inanimate objects over the centuries includes such last-name notables as Shakespeare, Milton, Austen, and Fitzgerald. 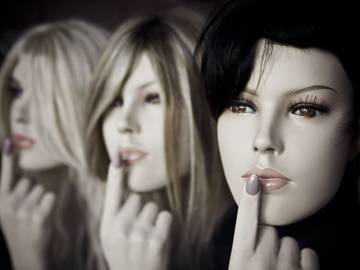 The mannequin, whose judgmental pose seems to imply disapproval, doesn't really care which word you use.

I could a tale unfold whose lightest word / Would harrow up thy soul ...
— William Shakespeare, Hamlet, 1601

On reaching the house, they were shown through the hall into the saloon, whose northern aspect rendered it delightful for summer.
— Jane Austen, Pride and Prejudice, 1813

I walked out the back way ... and ran for a huge black knotted tree whose massed leaves made a fabric against the rain.
— F. Scott Fitzgerald, The Great Gatsby, 1925

It wasn't until the 18th-century that the sticklers of grammar took notice of this centuries-long peccadillo, emphatically declaring whose to be the possessive only of the relative pronoun who while whispering their acknowledgment that English lacks an equivalent possessive for which and that. Their recommendation has been to use the construction of which for inanimate objects. This might work in some cases, but for the most part, it ends up sounding clumsy or stilted.

For example, compare the following pairs of sentences using whose and then of which.

Of note is how whose creates a smooth flowing sentence compared to of which. It is no wonder writers have chosen not to listen to the sticklers and to use whose in such cases.

Another recommendation for when the possessive for an inanimate object might be called for is simply to construct the sentence without the possessive.

He was watching the movie with the title that I couldn't remember earlier.

The car with the cracked windshield is his.

The avoidance of whose certainly works, but the fact is it is easier to borrow whose to convey possession for an inanimate object than to work around it.

The persistent borrowing has resulted in filling the gap in modern English grammar, making the notion that you can't use whose for lifeless things outmoded, like the rules against splitting an infinitive and ending a sentence with a preposition. If you want to use whose in reference to an inanimate object, go ahead; if you choose to rewrite a sentence to avoid using whose, feel free to do that too. In regard to of which: it seems a good choice when a formal or literary tone is desired.

Before closing, the one instance in which whose cannot be used for an inanimate object should be mentioned—and that is in the interrogative case. When whose appears in the beginning of a question, such as "Whose keys are these?," it can only function as a pronoun for a person or animal.

If you are asking which container a lid belonged to, you would not say, "Whose lid is this?," because whose in such instances can only refer to a living being. Rather, you would say something like "Which container does this lid belong to?"

You should also pause to ask yourself the important question, "Why am I speaking to containers in the first place?"