We'll get to semicolons later.

Colons (:) introduce clauses or phrases that serve to describe, amplify, or restate what precedes them. Often they are used to introduce a quote or a list that satisfies the previous statement. For example, this summary could be written as "Colons can introduce many things: descriptors, quotes, lists, and more."

What Is a Colon?

We all know the colon, right? It's a punctuation mark that looks like two dots stacked, like a period with another period hovering above it :

It's typically a mark of introduction, used to let the reader know that what follows the colon has been pointed to or described by what precedes the colon. (This is quite a different function from that of the semicolon, which is mostly used to separate two independent sentence parts that are related in meaning.)

In the running prose that we encounter in books, magazines, articles, and the like, colons are mostly used to introduce a clause or a phrase that explains, illustrates, amplifies, or restates what precedes them. (Reminder: clauses and phrases are both groups of words within a sentence; the basic difference between them is that a clause has its own subject and verb, while a phrase does not.) 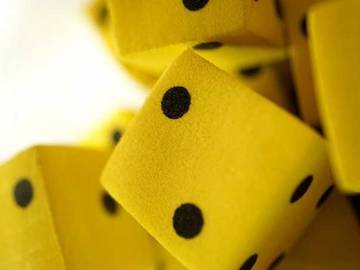 Colons are also hard to find in stock photography, so just go with it.

Let's first look at some colons introducing clauses and phrases that explain, illustrate, amplify, and restate what's come before:

Harry the Dog and Mabel the Cat were having an impassioned argument about umbrellas: are umbrellas properly to be used only for rain?

In this example, what comes after the colon explains just what the argument referred to in the first part of the sentence is all about. Note that what follows the colon is not capitalized, but it could be. As a clause—it has its own subject and verb and could in fact function alone as its own sentence, albeit a sentence of the question variety—it certainly looks like something that can start with a capital letter, but whether it does or not is simply a matter of style. (Note that in British English the style is typically to go lowercase. Lowercase also happens to be Merriam-Webster's style.) Be consistent: capitalize the first letter in every clause that follows a colon, or always use lowercase.

Mabel the Cat was adamant that Harry recognize the usefulness of umbrellas for all wet weather: as protection against rain, sleet, and snow.

Here, the phrase following the colon illustrates what comes before it. Being a phrase and all, there is no capital letter. (There of course would be a capital letter if the first word of the phrase were a proper noun or acronym.)

"But why limit it, then, to wet weather?" Harry wanted to know. "Sun too beats down: is not an umbrella also appropriate protection against sun?"

Harry's clause, which would begin with a capital "I" if that were our style, amplifies what precedes it.

Mabel was having none of it: she remained unmoved.

Here, the clause following the colon restates what precedes it.

"Harry," said Mabel, "umbrellas are about one thing: dry fur."

The noun phrase "dry fur" is in apposition to the "one thing" noun phrase on the other side of the colon.

"But Mabel," Harry pressed, "isn't the crux of it all in truth this: an umbrella is a collapsible shield for protection against weather generally?"

The clause following the colon is in apposition to "this" (which is a pronoun referring to "the crux of it all," if we're going to get technical about it).

"Oh Harry," replied Mabel, "a similar object that protects against sun has another name altogether: parasol."

The word "parasol" is in apposition to the noun phrase "another name altogether."

How NOT to Use Colons

Colons Can Introduce Lists and Series

And then there is the colon that introduces a list or series. What follows the colon is typically a word or phrase, so capitals are not be expected unless there's a proper noun or acronym:

The list or series can also be composed of phrases:

Mabel's reply was emphatic. "You may be eternally encumbered by an umbrella then, Harry, but I will bear the following: an umbrella for wet weather, a parasol for hot sun, and a beret whenever I feel like it."

The list or series can also come before a summary statement:

Colons are also commonly used in prose to introduce quotations. When the quoted material is lengthy, it's usually set off from the rest of the text by indentation but not by quotation marks:

Mabel was suddenly inspired to recite a bit of Lewis Carroll—specifically an excerpt from his 1871 Through the Looking-Glass and What Alice Found There:

All this time Tweedledee was trying his best to fold up the umbrella, with himself in it…. But he couldn't quite succeed, and it ended in his rolling over, bundled up in the umbrella, with only his head out: and there he lay, opening and shutting his mouth and his large eyes—'looking more like a fish than anything else,' Alice thought.

A colon can also be used before a quotation in running text, especially when the quotation is lengthy; or when it is a formal statement or a statement being given special emphasis; or when a full independent clause precedes the colon. Here's an example of the first kind:

"You know, Mabel," mused Harry, "while an avalanche perhaps does not quite qualify as 'weather,' an umbrella can also be used as protection against it. According to Mark Twain, anyway: 'We might have made the summit before night, but for a delay caused by the loss of an umbrella. I was allowing the umbrella to remain lost, but the men murmured, and with reason, for in this exposed region we stood in peculiar need of protection against avalanches; so I went into camp and detached a strong party to go after the missing article.' That's from A Tramp Abroad."

And here's an example with a formal statement, or statement given special emphasis:

"I'll remind you, Harry," stated Mabel somewhat imperiously, "that this same text poses the absurd rhetorical question: '… what is an umbrella but a parachute?'"

And here's an example in which a full independent clause precedes the colon:

Harry, nonplussed, lunged toward a non sequitur. "I recently learned," he averred, "that the word 'umbrella' appears 26 times in James Joyce's Ulysses, and that three of those appearances occur in a single sentence: 'She disliked umbrella with rain, he liked woman with umbrella, she disliked new hat with rain, he liked woman with new hat, he bought new hat with rain, she carried umbrella with new hat.'"

Mabel's response is unknown, which is just as well: the fact is that we've got nothing more to say about colon use in prose.

MORE TO EXPLORE: A Guide to Using Semicolons