People use dictionaries for all kinds of things. They turn to these books for reasons such as settling arguments, gaining knowledge about how our language works, and ascertaining whether that thing they did the night before might rightfully be considered a sin. What is sin? 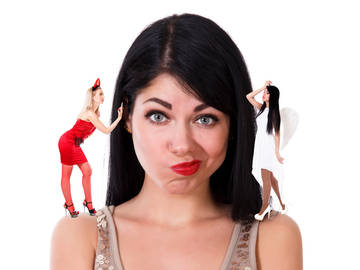 If 'sin' feels a bit much, consider a word from the Latin 'peccare', like 'peccadillo' (“a slight offense”), 'peccable' ("liable to sin"), or 'peccant' (“violating a principle or rule, as of taste or propriety”).

Alas, we are not in a position to offer a definitive statement on this matter, as the vicissitudes of sin are as boundless as are the ways in which one might be sinful. The question of whether that thing you did last night is a sin, or might perhaps be better described as an impropriety is beyond our ken. We can offer some information on this topic, although our purview restricts us to lexical matters.

The word sin is, unsurprisingly, not one of the newer additions to our vocabulary; it has been in use for well over a thousand years. Our current form of the word comes from the Middle English sinne, which is itself from the Old English syn. The original meanings of sin were largely concerned with religious matters (“a transgression of religious law,” “an offense against God”).

When we compare sin with other short words that are long-standing in our vocabulary (such as set) it is somewhat striking just how little it has changed in meaning, and how few senses, relatively speaking, it has taken on. There are a few ways in which sin has taken on a weakened, or non-ecclesiastical meaning. We have, for instance, been using sin in a transferred sense for several hundred years, as evidenced by the splenetic letter written by John Hall to William Prynne, published in 1649:

Certainly so your literary sins in this kind (not to Accompt your morrall or Theologicall) are horrid and Innumerable and (without the interposition of somewhat above Mercy) Impardonable.
John Hall, A Serious Epistle to Mr. William Prynne, 1649

And the word sinful, although it is most often found used in reference to behavior that is in some way wicked, may also be found denoting activities which are quite enjoyable (although still guilt inducing).

But one day a romantic young man invaded the sanctuary the aunt had built around Elena, persuaded her to go to the movies, and to partake in a sinful chocolate ice cream soda. It was then that life began to take on complexities for the girl, for that first visit to the outer world changed her whole life.
Louisville Courier-Journal (Louisville, KY), 25 May, 1919

Sin may not have changed its meaning so very much over the centuries, but it has found itself used in a fair number of compound nouns, some of which allow shades of sinfulness (a venial sin is much less serious than a mortal sin). Some of these compound nouns have fallen out of general use, such as, we regret to say, the title of one of the more curious occupations we have come across, sin-eater. Before you get too excited about bringing this one back, you should know being a sin-eater was not as much fun as it sounds like it would be; it refers to “a person formerly hired to assume the sins of a dead person by eating food placed near the corpse.”

The manner was, that when the corpse was brought out of the house, and laid on the bier, a loaf of bread was brought out, and delivered to the sin-eater, over the corpse, as also a mazzard bowl, of maple, full of beer (which he was to drink up), and sixpence in money: in consideration whereof he took upon him, ipso facto, all the sins of the defunct….
William Hone, The Year Book, 1832