Since at least 2012, the word dabbin' or dabbing has referred to the act of heating a sticky oil or wax of concentrated THC extracted from cannabis and inhaling the vapors. While this method of smoking THC vapors is itself very old, this name for it is not. The use of dab in this sense has not been widespread enough to get our attention, but there are two other new uses that seem to be spreading—and all three may be connected. 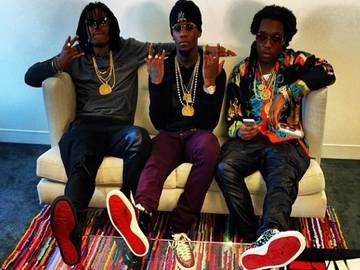 'Dabbing' is a dance move believed to have originated in the Atlanta, Georgia rap scene. In addition to that, 'dabbing' is being used as a generalized term to say that someone is self-assured. A song by the group Migos (pictured) states that while other people are "still sayin' swag" they've "switched it up we call it dab."

Dabbin' or the dab is also the name of a dance move believed to have originated in the Atlanta, Georgia rap scene, and in addition to that, dabbin' is being used as a generalized term to say that someone is self-assured. The two uses seem to have developed around roughly the same time.

In May of 2015, a dance video appeared on YouTube titled "Dabbin Dance Official Video."

That fall, a hip hop trio called Migos released a song titled "Look at my Dab." The following lyrics from the Migos song indicate that "feeling Fab" is a result of dabbin', but it's not immediately clear if this dab is referring to the drug use, the dance move, or the self-assured use—or a combination of the three. On the one hand, the lyrics clearly reference the drug:

On the other hand, later in the song they clarify that other people are "still sayin' swag" and they've "switched it up we call it dab." Shortly before the song was released, Atlanta rapper PeeWee Longway defined dabbin' in a video on YouTube:

which is in agreement with the definition from Migos:

thinkin' that it's just a dance
When dabbin' is a way of fashion
—"Look at My Dab," Migos

It's clear that the "confidence" meaning and the use for the dance move are connected, and that one can show one's confidence by doing the dance move.

Emerging out of the Atlanta hip-hop scene, the dab is an expressive sneezing gesture that in some way shows your swagger dominance over all other haters. (Because nothing says “swag” like a sneeze).
—Dashel Pierson, The Intertia, 1 February 2016

In case you’re wondering, ‘Dab’ is supposedly the new ‘Swag’ replacement and ‘Dabbin’ is the dance that signifies your swag dab.
—ATLien, Straight from the A, 8 Dec. 2015

By July of 2015, the term was defined on Urban Dictionary as "Atlanta lingo for a level of confidence to your swag" and later "to give a sharp nod to your raised four [sic] arm. Dancing with sharp nods repeated," and Cam Newton made "the dab" his signature touchdown celebration move, sparking rapid spread throughout the country.

But are these uses connected to the drug meaning? Despite claims that the dance move has nothing to do with the drug use, there is some speculation that it gets its name because it looks like a cough that results from inhaling the concentrated THC vapors, but this theory is not supported by many. Still, when you consider the adjective use of dope it doesn’t seem too far-reaching to postulate that this "confidence" use of dab may have been born from the drug use, at least lexically speaking.

We can't say yet if these new uses of the word dab have staying power, but with their varied forms, both syntactic and semantic, it's something worth keeping an eye on. Migos, on the other hand, already made their prediction:

Look at my dab, everybody sayin' dab
...
Dabbin' goin' in the dictionary, Birds sangin' just like Mary Mary
—"Look at My Dab," Migos