What is a 'Firebrand'?

From a burning stick to a divisive agitator

Firebrand has been much in the news of late, used often in describing (and criticizing such descriptions of) some of the more polarizing figures in the modern political landscape.

Republican voters lashed out against traditional party leaders Tuesday, ousting Representative Mark Sanford of South Carolina and nominating a conservative firebrand for Senate in Virginia, the latest illustration that fealty to President Trump and his hard-line politics is paramount on the right.
— Jonathan Martin and Alexander Burns, The New York Times, 12 June 2018

Stewart is not a “hard-right activist.” Neither is he a “hard-right firebrand.” He is an unapologetic public racist....
— Charles P. Pierce, Esquire, (esquire.com), 13 June 2018 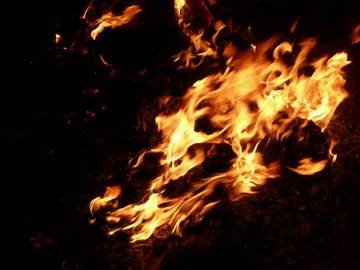 The word's most familiar current meaning is “one that creates unrest or strife (as in aggressively promoting a cause)."

Firebrand is not a new word. It comes from the Middle English firbrand (or firbrond), which itself comes from combining the words—fasten your seatbelts—fire and brand. The earliest meaning of brand is “a piece of wood that has been or is burning (such as one from a hearth or a burning building),” a sense that has been in use since the 12th century, and which is the forerunner of the modern sense of the word meaning “a class of goods identified as being the product of a single firm or manufacturer.” Firebrand has been used since the 13th century; the Oxford English Dictionary records an obsolete sense (“a spark, a flame”) dating from about 1275. The earliest sense defined by most general English dictionaries (“a piece of burning wood”) dates from the 14th century.

The word has taken on a number of figurative meanings over the centuries. One of the older ones is “a person damned to burn in hell.”

Tell me now thou desperare traitor, tell me I say thou firebrand prepared to burne in those euerlasting and reuenging horrible fires of hell, what wouldst thou haue done more then thou hast done, in case thou haddest bene perswaded that all were meere lyes, which thou hast belieued….
— I. B., A Looking Glasse of Mortalitie, 1599

The sense that is more familiar to most English speakers today is the one which we define as “one that creates unrest or strife (as in aggressively promoting a cause); agitator.” This sense occurs first in the Wycliffe Bible (1382), and then appears to be little used until the 16th century. Some of the early uses of this sense of firebrand employ it in reference to a thing, rather than a person, and it is often closely tied to sedition.

The fearce and cruell barbarous natyon experte and exercysed in battell and acustomed to warres receyuynge at one tyme a doble wounde of iniurye and reproche dyd begynne to seke a captayne which myght carrye the fyer bronde of sedytyon before them.
— Theodorus Bibliander, A Godly Consultation unto the Brethren and Companyons of the Christen Religyon, 1542

Yet as the matter nowe fallethe owte, especiallie yf we shall geue any creditt to an infamouse libell, or rather a fier brande of sedition late caste abrode….
— John Leslie, A Defence of the Honour of the Right Highe, Mightye and Noble Princesse Marie Quene of Scotlande, 1569

In early American history the word is often encountered in the “agitator” sense.

In the latter, the Assembly, by the Influence of that Firebrand Otis, has imprudently turn’d out all the Crown and other Officers out of the Council.
— William Franklin, Letter to Benjamin Franklin (founders.archives.gov), Jul. 1766

Let me give you the character of one of them, (Young) in a conversation which really passed in 1772 between Timothy Ruggles, & Royal Tyler.
Ruggles. That Tom Young is a firebrand, an incendiary, an eternal fisher in troubled waters. Boston will never be in peace while that fellow is in it. He is a scourge, a pestilence, a judgement.
— John Adams, Letter to Benjamin Franklin (founders.archives.gov), 8 Feb. 1789

In modern parlance firebrand may be found in reference to people across a wide range of affiliations (of political, religious, and other kinds). Given that an inherent quality of the firebrand is that they agitate, it should come as no surprise that the use of the word catches heat.