It originally meant "having wings"

The meanings of words, like the prices of commodities, are established by the marketplace. If the price of, say, coffee beans, lumber, or oil is determined by supply and demand, the meaning of a word is determined by the frequency and breadth of usage.

It’s also true that a word’s meaning can change according to the needs of the marketplace. If we need a word that means “harsh and angry rhetoric,” we can use vitriol, which originally meant “concentrated sulfuric acid” but is now rarely used in that way; “liquid that burns” has become “words that burn,” the painful literal becoming the powerful figurative and a useful addition to our vocabulary. 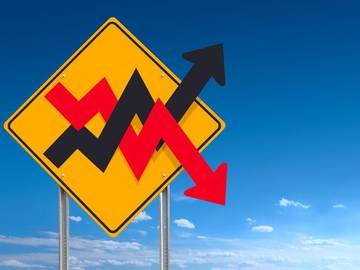 Samuel Johnson’s only definition of the word 'volatile' in his 1755 dictionary was “a winged animal.”

A similar shift from the literal to the figurative has happened with volatile, a word that came to English from French and derives from the French verb voler (pronounced /vo-lay/), which means “to fly.” Voler ultimately from the Latin word volatilis, meaning “winged.” In French, volatile (/vo-lah-teel/) had adjectival meanings such as “having wings” and “able to fly.” A related word, volaille (/vo-lye/) means “poultry” or “bird” in modern French, and is a word you may see on menus at fancy restaurants.

As a French noun, volatile means “an animal that flies” or simply “bird,” and this is the way the word was originally used in English—in fact, Samuel Johnson’s only definition of the word volatile in his 1755 dictionary was “a winged animal.”

Adjective meanings followed in English, so that in addition to “having wings” or “able to fly” (as in "volatile insects"), it began being used with reference to liquids like alcohol or ether that would steam or evaporate at relatively low temperatures—and it’s probably not an accident that this usage dates to the period before alchemy was displaced by chemistry.

It’s a coincidence that this word that means “changeable” in chemical terms is also a model of changeability of meaning for words in general (though probably nobody called it “meta” in the 16th century). And the meaning “changeability” is what took hold for this term, overtaking “flight” as the principal concept that it conveys: by Noah Webster’s time, in 1828, he recorded not only the “liquid to gas” meaning but a new one, “lively” or “fickle”:

So volatile eventually went from “flight” to “flighty” in meaning. But while “flighty” has an unserious connotation, volatile retained its Latinate seriousness and the “lively” and “full of spirit” meaning has since given way to the more sober “unpredictable” or “subject to rapid or unexpected change.” This is the meaning for volatile and volatility that we associate with financial markets, a use that was missed by Webster but was already in use in the mid-19th century:

The publication of the Congressional anti-British visitation speeches had a depressing effect upon the volatile stock market of New York, and prices were generally lower yesterday.
— Boston Daily Traveler, 1 June 1858

Wickham once more wakes up, and a whole fry of little ninepenny stocks have again been put in train, as Annapolis, Chester, Lake, Nelson, &c. Waterloo made its appearance once more on Friday at 60c, and that was considered as beginning a new line for this volatile stock.
— Commercial Bulletin (Boston, MA), 6 August 1864

The fair weather has imparted activity to almost every branch of business; and the general activity now noticeable may spread to the volatile stock market.
— The Philadelphia Inquirer, 5 April 1867

Indeed, this context has become the most frequent use for the noun volatility, a word that is most frequently preceded by the words price and market in contemporary English. We have even noticed an uptick in lookups for volatility when financial markets are unstable, showing a real-time connection between the word and phenomenon it names. A word that originally meant “having wings” now only needs stock market jitters to take off.