We Got You This Article on 'Gift' vs. 'Present'

Both gift and present are synonymous when referring to something thoughtfully given, often in recognition of an achievement or holiday. However, gift can be used as an attributive noun, as in gift bag or gift box. Additionally, both gift and present function as verbs.

Consider this article a gift. Or perhaps a present. Whatever you want to call it, we've made it very easy to unwrap. 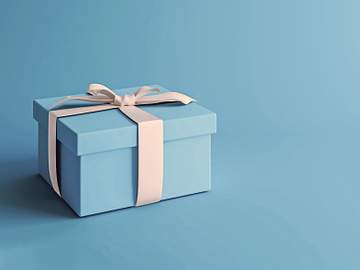 It's from all of us.

There is no difference between presenting a gift or gifting a present in acknowledgement of some special occasion, achievement, gesture, etc.—for example, a birthday, a holiday, a retirement, or an act of kindness, friendship, or love. The nouns gift and present are synonymous in their meanings referring to something that is thoughtfully given to someone without expectation of return. We will explain, and as an additional treat we will defend gift as a verb (but you will find that present elsewhere).

The Origins of 'Gift' and 'Present'

The delivery of the words gift and present to the English language was by two different linguistic routes—one Germanic, the other French. Gift was presented to English through Old Norse, the North Germanic language of the Scandinavian peoples prior to about 1350. In Old Norse, it meant "something given," "a talent," or "a special ability," and common meanings in English reflect that origin (and, yes, gift and give are tied but the ribbon that connects them is long).

During the 16th century, the noun gift gained a verb form meaning "to endow" (e.g., "She's been gifted with a beautiful singing voice"). By association, the verb came to mean "to make or present a gift of"—for example, "The couple gifted a bottle of wine to their host" or "The collector gifted the museum with the paintings." The latter meaning of the verb gift was not received well by some language commentators. We present our comments on this subject here, but to summarize, packaged up tightly and delivered: gift as a verb has meaningful distinction from generic give—that is, when something is said to be gifted, it has implications of thoughtful consideration; something given, however, might be handed over without much care or thought, as in "He wanted to borrow the book, but instead I just gave it to him." There is nothing fundamentally wrong with the verb gift: it is received with lexicographical joy.

'Present' as a Verb

The noun present, meaning "something presented" or "a gift," appears in 13th-century English. It is derived from the Anglo-French verb presenter, meaning "to bring or place before or into the presence of," "to introduce." The verb is related to Latin praesentare and its related adjective praesens, which is the present participle of praeesse, meaning "to be before one." As with gift, the semantic development of present (which signifies something placed before one) in English is wrapped in its roots, and senses allude to location or time—or the now. Similarly, the noun gifted the verb present to English, which is used especially to indicate the introduction of a performer or performance, a talk, legal evidence, etc., as well as the presentation of a gift, wrapped or not wrapped.

To tie this up with a metaphorical bow: gift and present both refer to something that is voluntarily given or bestowed to another person. However, gift has the distinction of functioning as an attributive noun (a noun used adjectivally as a modifier of another noun). Examples are gift bag, gift basket, gift box, gift card, gift certificate, gift exchange, gift shop, and gift wrap. Additionally, the word is common in law and finance for signifying something (such as property) transferred by one person to another without compensation—or simply a money "gift." These uses have also undergone verbification. Examples are "He gifted his property to the town's nature preserve" or "The philanthropist gifted a donation to the foundation."

So, by definition, whether you consider the item that you freely give to a person a gift or a present, it is the same thing to the recipient: an item accepted and either wanted or unwanted. Hopefully, it is of the former kind.