But 'all of the sudden' is making a statement online

The noun usage of sudden has all but been abandoned by history and the word has become bound to "all" in the idiom "all of a sudden," meaning "suddenly, or sooner than expected." There's no grammatical reason why the correct phrase is "all of a sudden" vs "all of the sudden," it's just the recognized form of the idiom English speakers have accepted.

First, if this is one of your pet peeves, we'd like to apologize for exposing you to so many instances of "all of the sudden" up there—consider yourself stronger for having survived it. (And to those who might be wondering just what the issue is, just keep reading.) 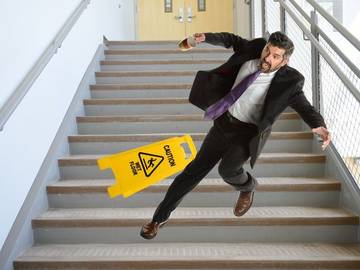 We're in the Golden Age of stock photos.

According to the word mavens, "all of the sudden" is considered a to-certainly-be-avoided mistake for the long-standing expression "all of a sudden" (meaning "suddenly," "sooner than expected," "at once"). Considering how few examples of the mistake are found in edited sources, it seems most writers and their copy editors are diligently heeding the advice. On the other hand, the phrase does have quite a life on social media, in self-published writing, and in quotations from interviews in edited sources.

Seems pretty simple, right? Here's where it gets weird: there's no clear-cut grammatical explanation as to why we use the article a in the expression instead of the. In the past, both articles commonly preceded the noun sudden (meaning "an unexpected occurrence, need, or danger") in phrases formed with of having the adverbial meaning "suddenly."

I was compelled to answere of the sodaine [sudden] unto the articles.
— Henry Barrow, in John Greenwood's A Collection of Certaine Sclaunderous Articles, 1590

Behold of a sodaine [sudden] behinde me, I heard a rusling noyse….
— Francesco Colonna, Hypnertomachia, 1592

Origins of 'All of a Sudden'

Evidence of the phrase "all of a sudden" goes back to at least the 17th century, and for some inexplicable reason, its use persisted while the noun sudden and its other set phrases formed with prepositions (in, on, upon, and at) gradually fell into disuse. Linguistically speaking, the noun lives on as a fossil in the modern expression.

We're not exactly sure why all became fixed in the expression either, but it does emphasize how entirely sudden or surprising the occurrence is—and it's had that same function for quite some time:

… they would needs have a golden Calfe instead of Moses, to goe before them, and therefore all of a sudden they came with great violence unto Aaron….
— John Dod and Robert Cleaver, Seven Godlie and Fruitfull Sermons, 1614

The fact that the expression is not clearly understood from the meanings of its composite words but has a separate meaning of its own makes it an idiom. For centuries, this idiom has existed with the indefinite article a, and it is in that form that people recognize it as being correct. Whether or not the construction "all of the sudden" (or the slangy "all sudden") will gain recognition and acceptance is yet to be seen. But its online usage, as well as its use in speech, happens quite a bit—and the people who watch and listen to such things are watching and listening.