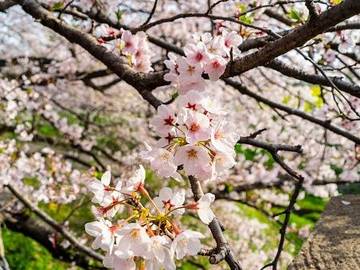 We hope you enjoy these flowers.

Insider trading was once again in the news, amid reports that the FBI had seized the cell phone of Senator Richard Burr.

Defined as “the illegal use of information available only to insiders in order to make a profit in financial trading,” insider trading has been in use since the 1930s.

”Nothing is imminent” on S.E.C. action relating to the stock market, officials said, although short selling, “insider” trading, the spread in market quotations and other market problems are under increasing scrutiny.
— The New York Herald Tribune, 19 Oct. 1937

Diminution also increased in lookups last week, after Dr. Anthony Fauci used the word in testimony before the U.S. Senate.

Sen. Warren: Do we have COVID-19 contained?
Fauci: "Right now, it depends on what you mean by containment. If you think we have it completely under control, we don't. We are seeing a diminution of hospitalizations & cases in some places, but in other parts, we are seeing spikes." pic.twitter.com/z4fVkcfSEr

Contact tracing appeared in numerous news stories last week, as a number of states looked into used cell phone apps as a means of collecting data on the spread of COVID-19.

Still, other than keeping stay-at-home orders firmly in place, public health officials say rapid testing and contact tracing give states the best chance to slow the virus and restart the economy crippled by the highest rate of unemployment since the Great Depression.
— Ken Alltucker and Jayne O’Donnell, USA Today (usatoday.com), 13 May 2020

We define contact tracing as “the practice of identifying and monitoring individuals who may have had contact with an infectious person as a means of controlling the spread of a communicable disease.” The word was recently added to our dictionary, and has been in use since the beginning of the 1930s.

For several years in certain parts of the country, and more recently in considerable parts of London, “variola minor” continued to smoulder, notwithstanding great efforts in contact tracing and for the promotion of vaccination of contacts.
— The Scotsman (Edinburgh, Sc.), 22 May 1931

Disparagement and disparage both had a big weekend, courtesy of the Ultimate Fighting Championship, after stories came out that the fistic organization had a non-disparagement clause for its fighters, stipulating that they not criticize the organization’s protocols for dealing with coronavirus.

Another source with knowledge of UFC contracts said "anti-disparagement" clauses are common in legal contracts and are designed to address cases of defamation unsupported by facts -- not just someone's opinion.
— Marc Raimondi, ESPN (espn.com), 9 May 2020

Disparagement, a noun, may be defined as “the expression of a low opinion of something,” “low opinion,” or “diminution of esteem or standing.” The verb disparage is defined as “to depreciate by indirect means (such as invidious comparison)” or “to lower in rank or reputation.” In Middle English, to disparage someone meant to cause that person to marry someone of inferior rank. The word derives from the Anglo-French word desparager, meaning "to marry below one's class."

Our Antedating of the Week: 'anxiety attack'

For our antedating of the week we are looking at anxiety attack, since is feels like the kind of word many people might be thinking of lately. The short definition is “a sudden feeling or episode of anxiety.”

The longer, and more specific, definition is “an episode of mild to severe worry, distress, or fear that may last for hours or days, is typically preceded by a period of gradually increasing levels of fear and worry (such as that associated with a perceived stressor or threat), and that has symptoms (such as increased heart rate and shortness of breath) similar to but often less intense than those associated with a panic attack.” Our previous earliest known use of this word had come in 1911; recent findings show that it has been in use since at least 1908.

I was called in to see this colleague during one of his anxiety attacks and got interested in his condition.
— Medical Record (New York, NY), 18 Apr. 1908