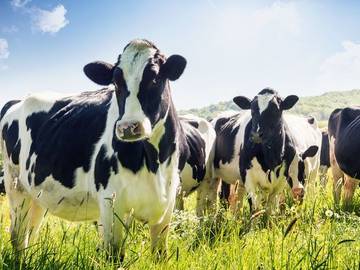 There are a surprising amount of cow-related words this week. You'll see.

An announcement by Google regarding its cloud-based gaming subscription service Stadia sent untold millions of people scurrying to look up whether the proper conventions of pluralizing English words borrowed from Latin or Greek had been observed.

Google's Phil Harrison tells Ars that Stadia game streaming should provide a smooth, full-resolution experience on Internet connections above a threshold of 20 to 30mbps, a level that should allow for "hundreds of millions of potential players in the markets that we're talking about.”
— Kyle Orland, ars technica (www.arstechnica.com), 21 Mar. 2019

Stadia is one of two ways of pluralizing stadium (the other is stadiums). Although it may be traced back to the Greek stadion, stadium came into English from Latin, and so many people have felt it proper to give the word a Latin ending in plural form.

Stone-cold (“absolute, utter”) and loser (“one that loses”) received the presidential seal of approval last week, as Donald Trump paired these together and tweeted unhappy thoughts about George Conway, the husband of a member of his administration.

Many people (we are using both many and people in highly figurative senses) have come up to us since then and asked us ‘which came first - stone-cold or loser?’ The answer to this question, as with so many others, is a resounding and thoughtful pause. Because we don’t know the answer. But we do have evidence of stone-cold and loser (in the sense of “one who loses”) from the same year, 1548, which may or may not be a coincidence.

Love was weaxed stone cold in hym: He was warmyng hymselfe by the fyer of wicked folkes, he was sittyng in coumpayny emongest a deiuilishe sorte, in the house of Cayphas the bishop, whereas hymselfe should afterwarde be a bishop, but muche vnlyke to Cayphas.
— Desiderius Erasmus, The first tome or volume of the Paraphrase of Erasmus vpon the Newe Testamente, 1548

For in all battailes you haue been the gayners, but in leagues and trea|ties, our wittes haue made you losers: so that you may content your se|ses, with the losse in treaties, for the spoyle that you gatte, in warres and battailes.
— Edward Hall, The union of the two noble and illustre famelies of Lancastre & Yorke, 1548

The use of stone-cold to modify loser is an invention of the modern era; we do not see these words used in the presidential manner until the second half of the 20th century.

Cow-related words were in the news a considerable amount this past week, for two (possibly unrelated) reasons. Reason the first was that there was still a good deal of press coverage of the ongoing measles outbreak (which is spreading due to a lack of vaccinations), and the continuing efforts of social media sites to decide how they should deal with regulating posts by those who are opposed to vaccines.

Instagram Purges Its Platform of Some Popular Anti-Vaccine Hashtags, But Others Are Still Thriving
— (headline) Gizmodo (www.gizmodo.com), 22 Mar. 2019

The words vaccine and vaccination both may be traced to the Latin vacca (“cow”), for reasons dealing with smallpox, cowpox, and 18th century medical ethics (or the lack thereof).

The second reason that cow words had a banner week was that California Representative Devin Nunes filed a lawsuit against, among other parties, a Twitter account named Devin Nunes’ cow. Many Twitter-users took this as an opportunity to respond on that platform with puns, most of which pertained to bovine words or characteristics.

His real beef is with Robert Mooler.

As a dictionary of long standing and short on humor, we would like to think that punning is somehow beneath us (which just means we’re not very good at coming up with puns), and so we will instead offer the contribution of an obscure word pertaining to the genus Bos: bovinity. This useful specimen means “the characteristics or qualities of cows or oxen.”

Our Author does not here give us the least Hint, against whom this part of his satirica Prediction is pointed. He only insinuates, by the bovinum fratrem, that they were two Brothers, who looked like a Pair of huge Oxen. But their Bovinities may be well satisfied, while they are not distinguished by any other Mark.
— William King, The Toast, 1736

Our Antedating of the Week: unvaccinated

For our antedating of the week we remain focused on vaccine words, specifically the adjective unvaccinated (“not having received a vaccine : not vaccinated”). Our earliest citation had previously come in 1871, but recent findings show the word in use in 1813.

Whereas every unvaccinated person, thus exposed, has probably taken the diease, and I shold fear, of those remaining at present uninfected, if not promptly vaccinated, that very few will escape.
— Edward Rigby, Report of the Norwich pauper vaccination, 1813