Don't say we didn't warn you.

Regardless of how you feel about getting a shot, it's very possible that what you're about to read will make getting your next vaccine even less appealing. It's not about vaccines themselves—we're your dictionary, not your local internet purveyor of spurious medical opinions—it's about the word vaccine. Its history, we're afraid, is not pretty. 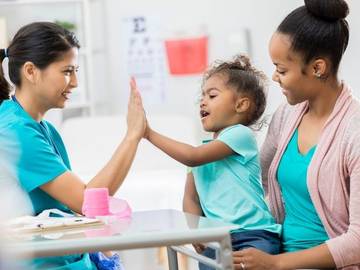 Get ready to read more about cowpox than you expected to today.

As the 18th century was winding to a close, an English physician named Edward Jenner set about to determine whether there was any truth to an urban legend of his day: milkmaids who got cowpox (a disease that causes ulcers on cows' teats and can be spread to humans at the site of a scratch or abrasion) didn't get smallpox. This was a big deal, because a case of cowpox would typically leave a person with a self-contained and localized ulcer or two, usually on a hand, while a case of smallpox would likely cause disfiguring scars at best and full-on death at worst.

In a process that likely would not get FDA approval today, Jenner inoculated an eight-year-old boy (one James Phipps) with material taken from a milkmaid's cowpox sores. (We warned you.) After the boy contracted and recovered from cowpox, Jenner went on to inoculate him with smallpox. The boy was, to our great relief, immune, and did not contract the disease. Jenner repeated this process with 22 more lucky folks and published his documentation of it all in 1798, in a slender volume called An Inquiry into the Causes and Effects of the Variolae Vaccinae, using the Latin term that charmingly translates as "cow pustules."

Due to, we must assume, the significant deficit variolae ("pustules") scored on the lexical charm scales, vaccinae ("cow") had the lasting lexical effect. From Jenner's book title came the use of the terms vaccine matter and vaccine virus for the cowpox inoculum (the virus-containing material used in inoculations), and vaccinations as a name for the inoculation procedure. French authors writing about Jenner’s work soon after his book's publication used the word vaccine alone as a term for cowpox, and vaccin (a masculine derivative of vaccine) as a term for the cowpox inoculum. Vaccine quickly came to be applied in English to the cowpox inoculum, and then broadened semantically to cover other kinds of inocula as well.

Because of Jenner's work, the horrific scourge that was smallpox was eventually eradicated. It goes to show that science doesn’t have to be pretty to be pretty awesome, and neither does etymology.