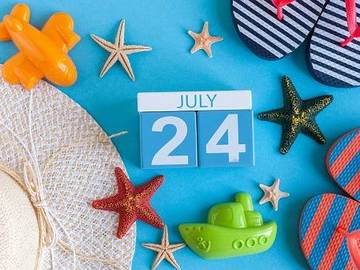 The words this week are slightly dark. Here's a bright photo.

The surprise announcement of a new album from Taylor Swift briefly propelled folklore to the top of our lookups this week.

Folklore can be defined as "traditional customs, tales, sayings, dances, or art forms preserved among a people" or "an often unsupported notion, story, or saying that is widely circulated." We will leave it to the stans to parse which meaning Ms. Swift intends.

The release of a second season of a television show sent a number of people scurrying to the dictionary in search of the meaning of its title.

"The Alienist" returns, but strains against its beautiful but oh-so-serious corsetry
— (headline) Salon.com, 19 Jul. 2020

Alienist is a synonym of psychiatrist, albeit one that is little used these days. At one time (in the 19th century) it was the preferred term. Alienist was borrowed from the French aliéniste, which itself is from médecin aliéniste, meaning "doctor treating the mentally ill.” Prior to this the word may be traced back to the Latin alius, meaning "other." Alienist also, we regret to inform you, represents the end of the "cheery" section of this week's words.

Accost was also very much in the news last week, after Representative Alexandria Ocasio-Cortez reported that her colleague Ted Yoho had done this to her.

"I never spoke to Rep. Yoho before he decided to accost me on the steps of the nation's Capitol yesterday," Ocasio-Cortez wrote. "Believe it or not, I usually get along fine w/ my GOP colleagues. We know how to check our legislative sparring at the committee door. But hey, 'b*tches' get stuff done.”
— Caitlin O’Kane, CBS News (cbsnews.com), 21 Jul. 2020

Accost (“to approach and speak to (someone) in an often challenging or aggressive way”) has been in English since the middle of the 16th century. The word was borrowed from the Middle French accoster, which itself had an earlier meaning in Old French, "to go alongside of, sail along the coast of, place (a vessel) beside another.”

Continuing protests in many U.S. cities, and increasing concern over whether the Trump administration’s response to them is crossing from policing to authoritarianism, has sent lookups spiking for a large number of words this week, including insurrectionist, paramilitary, surge, and gestapo.

An insurrectionist is “a favorer of or participant in insurrection,” and insurrection, for those who are too lazy to click the link, is “an act or instance of revolting against civil authority or an established government.”

The U.S. Department of Homeland Security’s Customs and Border Protection arm confirmed on Tuesday it has deployed officers from three paramilitary-style units to join a federal crackdown on protests against police violence in Portland, Oregon.
— Mark Hosenball, Reuters, 21 Jul. 2020

Paramilitary is defined as “of, relating to, being, or characteristic of a force formed on a military pattern especially as a potential auxiliary military force.” While this word may be applied to a range of organizations it is usually found used in reference to forces formed by a government (those opposing a government are typically called guerrillas or insurgents). The prefix para- has a variety of possible meanings, including “beside, alongside of,” “parallel,” and “associated in a subsidiary or accessory capacity.”

Surge functions as both verb and noun, both of which came into use in the beginning of the 16th century. The possible noun uses contain such meanings as “a swelling, rolling, or sweeping forward like that of a wave or series of waves,” and “a large wave or billow; a swell”; these senses are found used in figurative as well as literal settings.

Gestapo comes from German, from Geheime Staatspolizei, literally, secret state police, although the meaning of the word has broadened sufficiently that we define it without regard to nationality (“a secret-police organization employing underhanded and terrorist methods against persons suspected of disloyalty”). The word has been in English use since 1933; in early use it always referred specifically to the German police under the Nazi government.

Newspapers and pamphlets run by German emigrants in Prague, Amsterdam, and Zürich occasionally find their way to Berlin in spite of the vigilance of Germany’s Ogpu, which now has its own portmanteau name of the “Gestapo” (abbreviation of “Geheime Staats-Politische Polizei”).
— The Observer (London, Eng.), 13 Aug. 1933

Our Antedating of the Week: 'secret police'

Our antedating of the week is secret police, defined as “a police organization operating for the most part in secrecy and especially for the political purposes of its government often with terroristic methods.” Our earliest known use of this word had previously come in 1823, but recent findings show that we were referring to them by this name as far back as 1802.

The author enters into some details concerning the secret police and censorship of Vienna: neither of them is so severe as has been generally imagined from the accounts of travellers.
— The Monthly register and encyclopedian magazine (London, Eng.), May 1802