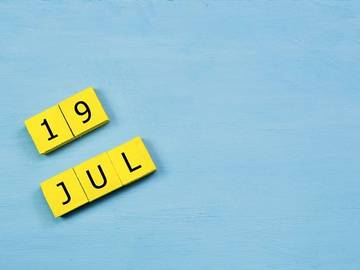 Blackout (“a period of darkness (as in a city) caused by a failure of electrical power”) received a good deal of attention this past week, after New York City experienced one over the weekend.

The word has a large number of possible meanings in addition to the one pertaining to melted ice cream, unwanted sweat, and a realization that conveniences of the modern era can disappear in an instant. Blackout may also mean “a turning off of the stage lighting to separate scenes in a play or end a play or skit,” “a blotting out by censorship,” or “a transient dulling or loss of vision, consciousness, or memory.” The meaning related to stage lighting is thought to be the earliest sense of the word.

Tweets made by President Trump, in which he suggested that four Democratic congresswomen (Alexandria Ocasio-Cortez, Ayanna Pressley, Ilhan Omar, and Rashida Tlaib) should go back to “the totally broken and crime infested places from which they came” prompted charges of racism. In addition to offering a number of definitions, here is what we have to say about this word:

Racism appears to be a word of recent origin, with no citations currently known that would suggest the word was in use prior to the early 20th century. But the fact that the word is fairly new does not prove that the concept of racism did not exist in the distant past. Things may have words to describe them before they exist (spaceship, for instance, has been in use since the 19th century, well before the rocket-fired vessels were invented), and things may exist for a considerable time before they are given names (t-shirt does not appear in print until the 20th century, although the article of clothing existed prior to 1900).
Dictionaries are often treated as the final arbiter in arguments over a word’s meaning, but they are not always well suited for settling disputes. The lexicographer’s role is to explain how words are (or have been) actually used, not how some may feel that they should be used, and they say nothing about the intrinsic nature of the thing named by a word, much less the significance it may have for individuals. When discussing concepts like racism, therefore, it is prudent to recognize that quoting from a dictionary is unlikely to either mollify or persuade the person with whom one is arguing.

Many people also turned to the dictionary in search of the true meaning of relish after President Trump responded to a press question by stating that he was not relishing his donnybrook with the congresswomen, but he was “enjoying it.”

WATCH: President Trump responds to whether he is relishing in his ongoing feud with the "Squad” #MTPDaily

“I’m not relishing the fight. I’m enjoying it because I have to get the word out to the American people. And you have to enjoy what you do. I enjoy what I do.” pic.twitter.com/cvrGavHXcc

Enjoy is among the definitions we provide for the verb form of relish, as are “to eat or drink with pleasure,” “to appreciate with taste and discernment,” and “to add relish to.” And for the uncountable thousands who were doubtless wondering if the “enjoy” sense of relish is related to the “condiment” sense of relish the people put on hot dogs, the answer is yes.

Mere anarchy was loosed upon the world (or at least the news) last week, when an advertisement by the Republican National Committee accused the congresswomen mentioned above of being interested in this state.

The GOP escalated its feud with four progressive congresswomen known as the “Squad,” releasing a new ad this week accusing the group of wanting “anarchy.”
— Tal Axelrod, The Hill (thehill.com), 17 Jul. 2019

Anarchy, which came into English in the 16th century (and can be traced to the Greek word anarchos, “having no ruler”) is a fine example of how a word may have a variety of meanings that are closely-related, yet distinct. The word may mean “absence of government,” “a state of lawlessness or political disorder,” “a utopian society of individuals who enjoy complete freedom without government,” or simply “absence of order.”

By the end of the week disavow had joined relish, racism, and anarchy, forming a quartet of words which have all spiked as a result of the President’s comments.

We define disavow as either “to deny responsibility for” or “to refuse to acknowledge or accept.” Should you have need of the noun form of this verb it is disavowal. Disavow is related to advocate (“one who pleads the cause of another”); both words may be traced to the Latin word advocare, meaning "to summon.”

A statement by billionaire Tom Steyer, in which he said that he does not see himself as rich, drew a certain amount of attention (and some degree of derision).

The oldest meaning of rich is "having abundant possessions and especially material wealth," but, as with so many other words in English, the word has a number of other possible meanings. Among these are "pure or nearly pure," "having a strong fragrance," and "laughable." As apolitical observers we have no position as to which is most semantically applicable to Steyer; as a descriptive reference work we would lean toward "having abundant possessions."

Our Antedating of the Week: 'blackout'

For our antedating of the week we return to the subject of the blackout. As mentioned earlier, the first recorded sense of the word is the one relating to the cessation of lighting in a theatrical venue; our earliest known use in this sense had come in 1913. Recent findings show that this sense was in use at least two years earlier.

The alleged automaton is dressed as a German cavalry officer. He is hoisted in a box almost to the flies. There is a “black out,” and he reappears in spangled tights, suspended from a trapeze.
— Variety (New York, NY), 23 Sept. 1911