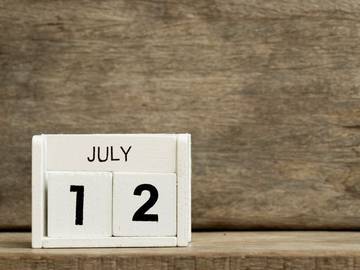 This week has something for both amateur seismologists and armchair lexicographers.

We had a definite spike in lookups for airport (“a place from which aircraft operate that usually has paved runways and maintenance facilities and often serves as a terminal”) after President Trump appeared to believe these were in existence more than 200 years ago.

US President Donald Trump has blamed a teleprompter going "kaput" for a glaring anachronism in his Independence Day speech. He told crowds on 4 July the Continental Army "took over the airports" during the American Revolutionary War in the 1770s.
— BBC News, 5 Jul. 2019

The airports mentioned in Trump’s speech did not exist in the 1770s; our earliest evidence for the word comes in the beginning of the 20th century. For those who love to quibble, and to make implausible arguments, we can point out that there was a different kind of air port (open compound) which did exist in the late 18th century: “an opening to release or admit air.”

Small windsails ought to be used for the better airing of the rooms; and by trimming them to the wind occasionally, they will be of more service than air ports, which are always shut at sea, when there is most need of them.
— Thomas Trotter, Observations on the scurvy, 1786

Catfight (“an intense fight or argument especially between two women”) received considerable attention last week, in large part due to the word appearing in a statement by White House counselor Kellyanne Conway and subsequent tweet by Rep. Alexandria Ocasio-Cortez.

“Catfight” is the sexist term Republicans use when two adult women happen to disagree with each other.

The reason they find it so novel &exciting is bc the GOP haven’t elected enough women themselves to see that it can, in fact, be a normal occurrence in a functioning democracy. https://t.co/s6eMMmvzrd

The word should not be confused with dogfight, which generally refers to a battle between fighter planes (although can be used in a broad sense, for any fierce combat, or may refer to a fight between dogs). You may also wish to know that many people find the word, when used to refer to conflict between women, to be belittling, dismissive, and sexist.

But after we saw Marleenie tear into Una Merkel in that knock-down and drag-out cat fight, we kinda figured she was human, after all. And by gum, she sure was.
— Photoplay, Apr. 1942

A series of earthquakes in California sent many people to the dictionary, in order to keep up with the precise meanings of words used by seismologists.

Jones said she could not recall a pattern of earthquakes in California where a 6.4 foreshock was followed by a 7.1 event, only to be followed by an even bigger quake.
— Karen Kaplan, Los Angeles Times, 6 Jul. 2019

Here are some earthquake-related words, all in one spot, in case you need them in the coming weeks.

Foreshock: “any of the usually minor tremors commonly preceding the principal shock of an earthquake.”

Aftershock (also afterquake): “a minor shock following the main shock of an earthquake.”

Bathyseism: “an earthquake of deep origin recordable at seismographic stations the world over.”

Seismograph: “an apparatus of varying type and structure designed to measure and record vibrations within the earth and of the ground (as produced during an earthquake or by artificial explosions or atmospheric conditions).”

Earthquaky: “suggesting the effects or the characteristic movement of an earthquake.”

A social media summit at the White House this week provided a sterling example of the dangers of ‘I don’t have time for this right now so just find an intern to do it’ lexicography.

The White House printed out various definitions of words at the Social Media Summit. pic.twitter.com/Ct1rBx6yQ7

The event featured placards with lexicographic simulacra, groups of words put together in such a fashion as to resemble entries found in a dictionary. Critics of the presentation pointed out that many of the “verbs” (such as demonetization) are actually nouns, publically is an odd choice of word variant to use in definitional language, and that the attempts at providing pronunciation (de·plat·fawrm·ing) made a thousand phoneticians weep and rend their hair. Those of you who someday in the future will need to create fake dictionary entries for some presentation or other would do well to remember that lexicography, much like plumbing and grave digging, is best left to professionals.

Our Antedating of the Week: 'teleprompter'

Our antedating of the week is teleprompter (“a device for displaying prepared text to a speaker or performer’). Our earliest record had previously come from 1951; recent findings show that it was in use at the end of the previous year.

New prompting device for television performers, which is hailed by at least one agency exec as the answer to daytime TV strip shows, received its first commercial use last week on the preem of CBS’ “First 100 Years.” Termed the Teleprompter and invented by actor Fred Barton now in the Broadway cast of “Mr. Roberts,” the device has the show’s actual script, typed in large, easy-to-read letters, within easy viewing distance of the actors but out of range of the cameras.
— Variety, 13 Dec. 1950

A much-needer invention is a teleprompter for those participating in TV shows. At various locations in back of the cameras the script is flashed in the same manner as stock quotations in a customers’ room of a brokerage—just in case anyone forgets his lines.
— Neal O’Hara, Boston Traveler, 22 Dec. 1950