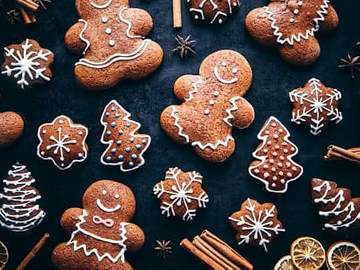 Annus horribilis did not trend at all this year, even though we all spent a considerable amount of time talking about what a horrible year it was, and this word has the literal meaning of "a disastrous or unfortunate year." We're not mad ... just disappointed. Please bear in mind that if things continue apace the correct way of pluralizing this is anni horribiles (and not annus horribilises). Also bear in mind, should things take a turn for the better, that the word's antonym is annus mirabilis (“a remarkable or notable year”).

Noel once again caroled its way to the top of a December-long rise in lookups this year. The word, meaning "a Christmas carol" or "Christmas," was borrowed from the French noël, itself from the Latin natalis ("birthday"). We've written more about its annual chart dominance here.

Searches for omnibus spiked this week after reports that Congress had passed a bill with this descriptor.

Omnibus is defined in our pages as either "a usually automotive public vehicle designed to carry a large number of passengers" or "a book containing reprints of a number of works (as of a single author or on a single subject)." As an adjective, it means "containing or including many items" and can often be found in omnibus bill, meaning "a bill that includes a number of miscellaneous provisions or appropriations." Early evidence shows omnibus was used in such a manner in reference to this kind of vehicle being able to transport passengers of all types.

Chartreuse saw more attention than it's used to this week, after Twitter found it a rather inapt name to describe what it does.

chartreuse is a lime green color but the name sounds like it should be a deep red? am i wrong? NO

We define chartreuse as "a light variable color between yellow and green." The color takes its name from the trademarked liqueur Chartreuse, which comes in green and yellow varieties and has been made since 1737 by Carthusian monks, whose monastery is located in the Chartreuse Mountains in the Grenoble region of France. As for the word's applicability to such a color, you'll have to take it up with the Carthusians.

Veto trended this week as President Trump formally disapproved of a bill sent by Congress.

President Trump on Wednesday made good on his promise to veto the annual military policy bill, setting up what could be the first veto override of his presidency after both chambers of Congress overwhelmingly approved the legislation.
— Emily Cochrane, The New York Times, 24 Dec. 2020

Veto, meaning "to refuse to admit or approve," is from the Latin meaning "I forbid."

Rubicon saw a fair amount of use in the past week, as a number of President Trump’s allies urged him to consider crossing it.

Arizona GOP chair urges Trump to heed Flynn and 'cross the Rubicon,' alarming people who get the reference
— (headline) The Week, 21 Dec. 2020

We define Rubicon as a geographical name (“river 15 miles (24 kilometers) long in north central Italy flowing east into the Adriatic Sea”) and as a noun (“a bounding or limiting line; especially, one that when crossed commits a person irrevocably”); the two definitions are linked, with the figurative noun use coming from the use of the geographical name. The Rubicon is a small stream that in the era of the Roman republic separated Italy from Cisalpine Gaul. It was crossed, from Gaul into Italy, by Julius Caesar in 49 BC, in violation of a law forbidding generals to take armies out of the province to which they had been assigned. This crossing was tantamount to a declaration of war by Caesar, and serves as the origin of the figurative use of the noun.

Our Antedating of the Week: 'hypocritical'

Our antedating of the week is hypocritical, defined as “characterized by behavior that contradicts what one claims to believe or feel; characterized by hypocrisy.” Our earliest known use of this word had previously come in 1553, but recent findings show that we’ve been hypocritical since at least 1536.

For the ryghtuousnes of feythe in Christ whiche chiefly ought to be taughte in the church is thus obscured and darkened: whyles these wonderfull & angelicall religions, as this fayned pouertie, this cloked humilitie, this hypocriticall chastite be caste before the eyes of men.
— Anon., The confessyon of the fayth of the Germaynes exhibited to the moste victorious Emperour Charles the v, 1536